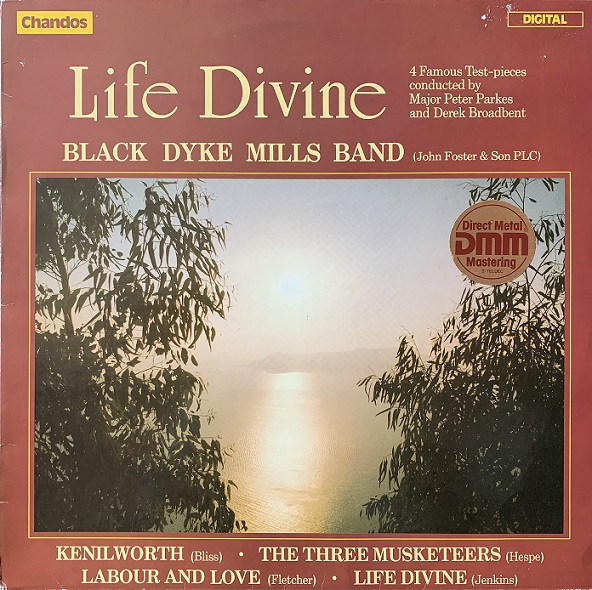 It seems starkly appropriate that the vicissitudes of life will mean that the 100th British Open Spring Festival will take place a year later than planned.

Even more so as it will feature Cyril Jenkins’ landmark tone-poem, written for the National Championships exactly a century before.  The Welsh composer originally thought of the wryly sarcastic title of ‘A Comedy of Errors’, but given the all too often tragic circumstances in which we all now live, ‘Life Divine’  seems acutely fitting.

35 years after it was recorded this LP also marks a crossroads of eras - one featuring Black Dyke at the peak of its musical maturity under Major Peter Parkes; a band of Phillip McCann, John Clough, John Slinger, David Pogson, Fred Ellis, Derek Jackson, David Essex et al - Queensbury cornerstones for decades and more.

At the time (May 1985) they were just a step or two away from reaching their last great apex together - ending the year crowned ‘Grand Slam’ (BBC Band of the Year, Yorkshire, British Open, National and European) champion.

Over the next few years they were all gone, and for the most part so too were ‘Labour & Love’, ‘Kenilworth’, ‘The Three Musketeers’  and even ‘Life Divine’  itself - replaced by the new breed of test-pieces.

Given the personnel and the experience of the two conductors, it is a recording that also bridges musical generations - a span of 70 years (‘Labour & Love’  appeared in 1913), from the ‘Lisztian bombast’ of ‘Life Divine’  to the cusp of the gargantuan vistas of ‘Cloudcatcher Fells’ (on which they memorably won the 1985 National title and recorded on a ‘Complete Champions’ release just a few months later).

After the band’s victory at the European Championships (where their own-choice was ‘Volcano’) there was debate in the banding press to what had become of the era of the famous British brass band sound: Nothing would quite sound the same again.

And not like this for certain; the performances seeping with melodic understanding, tonal warmth, nuanced phrasing and above all else, an intuitive appreciation of style.

Derek Broadbent’s interpretation of ‘Life Divine’  has a swashbuckling flow of drama and pathos, richly mixed in colour and timbre. The delicacy of Philip McCann’s cornet playing sits on top of a layered foundation of ensemble playing that has such clarity in its waspish technique.

There remains an argument that these are not great works in the wider musical context – the sleeve describes them as ‘famous’ rather than ‘great’ test-pieces, but three remain definitive stanchions to which our repertoire is pinned.

Major Parkes leads the listener on a tour like an expert National Trust guide; pointing out all the little nooks and crannies of the Castle Gates, lingering just for the perfect moment or two on the banks of the lake before sitting back to enjoy the regal procession to close.

The exception is ‘The Three Musketeers’  by George Hespe; little more now than being ‘famous’ as the work that saw the National Band of New Zealand win the 1953 British Open.

It has suffered cruelly by the passing of time - a series of hackneyed pantomime portraits of Aramis, Athos, Porthos and D’Artagnan (Aramis the ‘introduction’ to the triptych) that owes as much to Alexander Dumas as the Lone Ranger does to the William Tell overture.

In contrast ‘Kenilworth’  retains its splendour; a 9 minute gem of superbly crafted musical architecture - not a wasted descriptive bar to be heard.

Major Parkes leads the listener on a tour like an expert National Trust guide; pointing out all the little nooks and crannies of the Castle Gates, lingering just for the perfect moment or two on the banks of the lake before sitting back to enjoy the regal procession to close.

He also shapes a wonderfully ornate reading of ‘Labour & Love’ - one that brilliantly balances the melodramatic and the magical, sympathetically stylised without once overplaying the obvious absurdity of its late Edwardian pastiche clothing.

It is a poetic appreciation; masterful in concept and execution - a fitting reminder of a great brass band conductor and a great band at the very top of their game celebrating an era of music thankfully not quite lost forever.