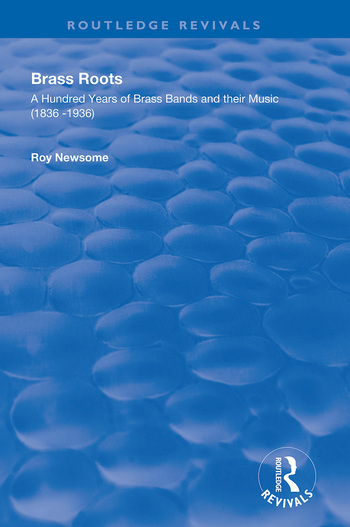 Routledge Revivals has created a respected niche in the publishing market place for re-issuing valuable academic books that have long been out of print.

Roy Newsome’s work is based on his research for his Salford University PhD thesis (1999) and was first published in 1998. It was followed in 2006 by ‘The Modern Brass Bands – From the 1930s to the New Millennium’ (also available at Routledge)

Where the latter is more of a personal miscellany, ‘Brass Roots’ retains a focused track of secondary analysis and investigation; the author (who died in 2011) readily acknowledging source material from the likes of Dr Derek Scott and Jack L. Scott, as well as early copies of the ‘Brass Band News’ (1881) and ‘British Bandsman’ (1887) amongst others.

Newsome’s personal links to many of the great historic names of the banding movement also allowed him enviable access to their treasure troves of early music – notably at Black Dyke and Besses o’th’ Barn, whilst the ten chapters span the early development of brass music and growth of the Victorian contesting culture and its leading figures, to the formalisation of instrumentation, organisation and musical expansion in the early part of the 20th century.

It also explains the chronological dates: 1836 the first year commercially printed brass band music readily appeared; 1936 marking the end of an era with the conflagration that engulfed The Crystal Palace.

Each offers a worthy addendum to the small but important body of existing, detailed academic research into the cultural history of the brass band movement in the UK, especially as the later advent of sophisticated internet search engines has allowed both amateur and professional historians to further unearth new layers of local and national substance.

However, one element above all else seeps through its 274 pages: The endorsement that little has changed to the template of the brass band movement that was forged like plate steel in the 100 year period he delves into.

Throughout there are fascinating gems still gleaming with pertinent relevance, despite being well over a century old - such as the legendary Alex Owen writing to the Editor of the Brass Band News about the 1885 British Open contest:

“But the worst evil of all is, in my mind, allowing the contest to take place in the large hall, which being practically void of ventilation, the ‘stagnant air’ becomes so very noxious, and is at times simply frightful; so much so, that bandsmen have been completely overpowered and have had to be carried fainting from the scene.”

What would he make of the effects of the miasma pandemic that afflicts us all today?

However, one element above all else seeps through its 274 pages: The endorsement that little has changed to the template of the brass band movement that was forged like plate steel in the 100 year period he delves into.

So much so that it’s obstinate lack of malleable innovation could potentially undermine the very sustainability of its history as it fast approaches the cusp of its third century.

To purchase the book, go to: https://www.routledge.com/