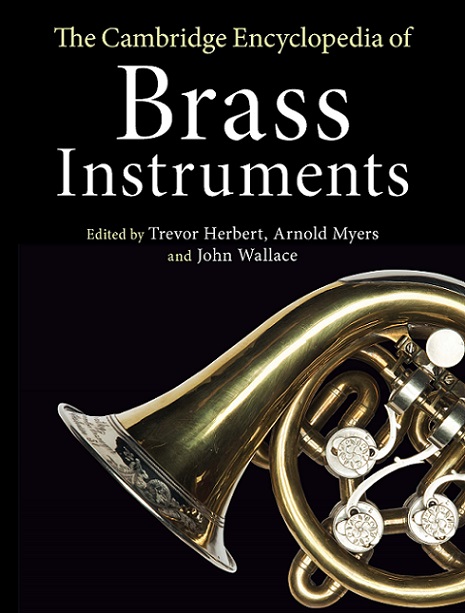 This outstanding book (now published in hardback and paperback), edited by three celebrated authorities on the history, design and performance of brass instruments, and aided by 32 experts from fifteen different countries across the globe, will undoubtedly become a definitive reference publication.

Its scope, from antiquity to the modern day is backed by forensic research and analysis. Each page and appendix is an education in itself; from Abblasen to Zorzi Trombetta da Modon, Jean Baptiste Arban and Wilhelm Wieprecht to lists of brass makers and didactic works.

The academic rigour imposed on the selection of entries is explained in a clear opening ‘guide’, with Prof Herbert providing an essay introduction that you suspect will be liberally plagiarised by many an undergraduate (let alone journalist) in the years to come. It is essential reading.

Its 612 pages see the familiar sit comfortably with the incredible, the forgotten resurrected to gain renewed appreciation alongside the famous.

There are pioneers and performers, instruments, inventors and entrepreneurs - each contribution and its importance marked, explained, referenced and cited; from the bizarreness of the cornophone and sudrophone to the ever expanding list of modern day Chinese manufacturers and the cornett fingerings and trombone slide positions from around 1600 by Italian music theorist Aurelio Virgiliano.

You are also left to wonder what would have happened to the brass band movement if Tsar Nicholas of Russia had spent more time championing the adoption of British made instruments instead of messing about with Rasputin and resisting democracy.

Its 612 pages see the familiar sit comfortably with the incredible, the forgotten resurrected to gain renewed appreciation alongside the famous.  There are pioneers and performers, instruments, inventors and entrepreneurs - each contribution and its importance marked, explained, referenced and cited.

Elsewhere, the entries covering Africa and South America are particular revelations; the haunting image of the young brass band players of the Boma training school for policemen in Congo Free State in 1897 a joyless snapshot of the fetid, inhumane underbelly of King Leopold of Belgium’s African empire. It is taken just two years before Joseph Conrad’s ‘Heart of Darkness’ was published.

The impact of the British brass band movement also has its place. Bands such as Besses, Black Dyke, Cory, Cyfarthfa, Foden's and Meltham Mills have entries alongside the Victorian giants of Gladney, Swift and Owen.

The musical mark made by Vinter, Sparke, Howarth and Snell (amongst many) is highlighted alongside John Henry Iles, Enderby Jackson and Harry Mortimer, whilst the technical appreciation of the development of  brass band instrumentation from Sax and Distin to Besson and beyond will keep engineering students enthralled.

Open to any page and you will become more informed.

It is a book of academic significance and rich occasional interest to anyone who wants to know more about the world of brass.

Available from various outlets including:
http://www.thewallacecollectionshop.world/product/the-cambridge-encyclopedia-of-brass-instruments/