Brassed Off! — in concert 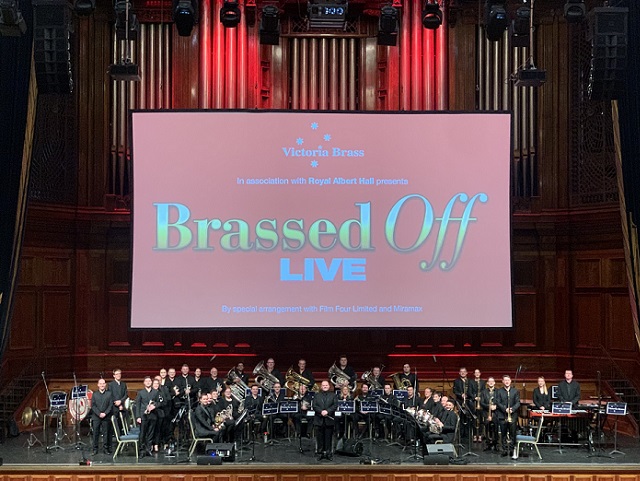 Both resulted in improbable victories.

The first came from Qatar where the Australian football team beat Denmark in a World Cup game, followed a few days later by a rerun of Grimley Colliery Band hoisting the trophy to become National Brass Band Champions of Great Britain.

The reality was as joyful as the make believe; 8,000 fans in Melbourne City Square going bonkers as their team secured success, whilst at the Town Hall a  few days later an audience of 2,000 film devotees almost took the roof off as the final chords rang out from the stage.

The acclaim for Victoria Brass, led by Dr. Matthew van Emmerik, and their ‘film-in-concert’ presentation of ‘Brassed Off!’, was well deserved. The ambitious project in association with the management of the Royal Albert Hall in London and by special arrangement with Film Four Ltd and Miramax, was only the second time the event had been held outside the UK.

The reality was as joyful as the make believe; 8,000 fans in Melbourne City Square going bonkers as their team secured success, whilst at the Town Hall a  few days later an audience of 2,000 film devotees almost took the roof off as the final chords rang out from the stage.

Grimethorpe (the real-life stars of the movie) had toured Australia in 2011, so it was heartening to see the response both the movie, especially played by an Australian brass band, still gained a decade or more later.

The amount of work undertaken was obvious to see and hear – the band playing superbly under their MD, the soloists, and in particular Andy McAdam on flugel on Rodrigo’s ‘Concerto de Aranjuez’  on sumptuous form.

It never faltered: the familiar, darkly comic storyline played out with just the right hint of emotional pathos – ‘Orange Juice’  to ‘Danny Boy’  and all pit stops in between.

By the time principal cornet George Melitsis had put on his turbo charged stirrups to lead the galop of ‘William Tell’,  there was only going to be one outcome: Victoria Brass, 35 strong and predominately made up of invited players from Melbourne’s leading bands had delivered a cracking dollop of entertainment – an ensemble very much the sum of its talented parts.

As pyrrhic victories go – ‘Brassed Off!’ still tops any football success – although on this form Victoria Brass will surely go on to win even more fans and silverware.