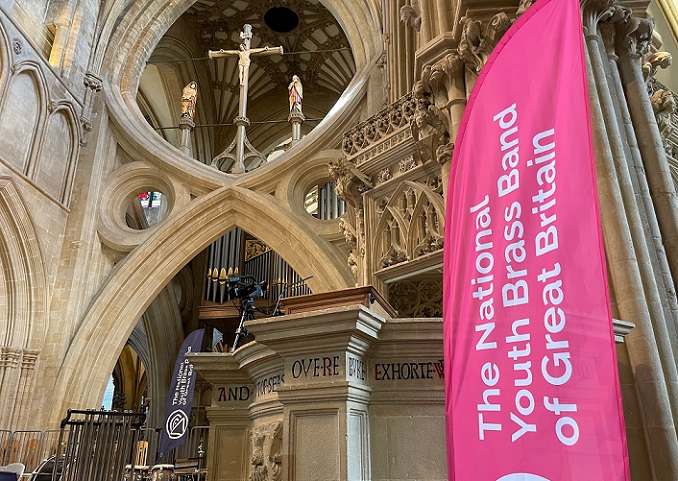 A subtle change of communal ambition permeates the National Childrens Band of Great Britain, with its vision of diversity and inclusivity directly imbedded to the overall ethos of its parent organisation.

Exploration and understanding is driving the musical success; the pathway of progression to the National Youth Band clearly defined and encouraged by conductors, tutors and staff alike.

That was certainly shown with an uplifting concert at a venue that will live long in the memory banks of the performers.

The acoustic may have had a longer time delay than the 2.45pm train from Temple Meads station, but any strike action didn’t stop the audience (with a significant number of non-family listeners) heading to Wells to enjoy a thoughtfully constructed programme.

The acoustic may have had a longer time delay than the 2.45pm train from Temple Meads station, but any strike action didn’t stop the audience (with a significant number of non-family listeners) heading to Wells to enjoy a thoughtfully constructed programme.

Karianne Flatene Nilssen was the excellent guest soloist. Her contribution was also tailored to the needs of 60 youngsters all eager to be involved in every bar; ‘The Acrobat’, ‘A Nightingale Sang in Berkeley Square’  and ‘Oblivion’  performed with a subtle musical emphasis and connectivity to the ensemble.

Her ‘encore’ of ‘Blades of Toledo’  (which included a pair of tenor trombonists who took on the challenge of playing bass trombone parts for the week) was a neat touch of inclusivity too.

The centrepiece was the world premiere of Lucy Pankhurst’s wonderfully inventive ‘En Route’ – a musical canal journey to the much closer horizon of Symphony Hall in Birmingham.

Russell Gray’s encouragement and wit also brought the best out of his young charges, with super solo contributions from principal players and confident sections; from the pomp of the ‘Cortege’  from ‘M’lada’  and the vocal skills in ‘Drop in the Ocean’  (led by euph tutor Gary Curtin) to Peter Graham’s clever series of Norwegian banding’s ‘Heroes of the North’  pen portraits.

The centrepiece was the world premiere of Lucy Pankhurst’s wonderfully inventive ‘En Route’  – a musical canal journey to the much closer horizon of Symphony Hall in Birmingham.

It embraced the chocolate coated pleasures of Cadbury’s World in Bourneville as well as the roadworks and noise of ‘Spaghetti Junction’ (aided by a great percussion section and host of boomwackers) before finally reaching Gas Street Basin outside the back door of Symphony Hall.

It was adventurous, clever fun, but also testing in its challenges – all met by the players (with super solo spots) with an eager desire to show their families just how far they had travelled in more ways than one (with an out of this world encore of 'Starburst'  to emphasise the point) during a memorable week away from home.