Last Night of the Welsh Proms 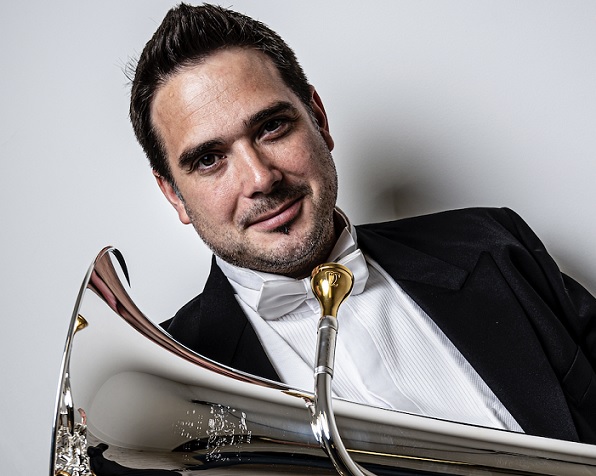 The 35th anniversary Welsh Proms once again provided a series of high-quality concert performances to enjoy in the heart of the Welsh capital.

With Cory Band performing in a rousing ‘Brass & Voices’ Prom earlier in the week, it was the Orchestra of Welsh National Opera that provided the traditional ‘Last Night’ lollipops topped by a quartet of stunning solo contributions from David Childs.

The centrepiece was the first concert performance of the Vaughan Williams 'Tuba Concerto'  adapted for euphonium.

The premiere recording was made for his critically acclaimed CD release ‘Symphonic Euphonium II’ released in 2019 with the BBC Philharmonic Orchestra. Transposed up a fourth, it makes for a lighter, reinvigorated sound palette, although none of the essential sonority is lost.

The soloist revelled in the space and time afforded him; delicate cadences and tempered dynamics brought into sharp, leanly sculptured focus.  It was a majestic, masterful performance, much appreciated by an informed audience.

Conductor Owain Arwel Hughes CBE celebrated his 80th birthday this year, so there was a deserved indulgence on his part with the familiar orchestral offerings -from Gershwin to Tchaikovsky.

The soloist revelled in the space and time afforded him; delicate cadences and tempered dynamics brought into sharp, leanly sculptured focus.  It was a majestic, masterful performance, much appreciated by an informed audience.

Elgar’s ‘Pomp & Circumstance No.1’  offered the patriotic opening to the second half, before David Childs returned for a dazzling rendition of Monti’s ‘Czardas’  followed by the beautiful ‘Benedictus’  from Karl Jenkins’ ‘The Armed Man’.

The encore of Rimsky-Korsakov’s ‘Flight of the Bumblebee’  buzzed with electrical virtuosity at a voltage output that very nearly popped the stage lightening.

With the flag waving patriotism levels thankfully much reduced, the concert concluded with the sugar-coated fun of ‘Tritsch-Tratsch-Polka’,  complete with spinning cellos and basses, before the finale of Gareth Woods’ ‘Songs of Wales’.

Before leaving the stage Owain Arwel Hughes gave a moving speech, where he thanked everyone who had worked together to bring this Proms series to fruition following the Covid-19 break.

He will be back next year he said. We can only hope David Childs will be too.