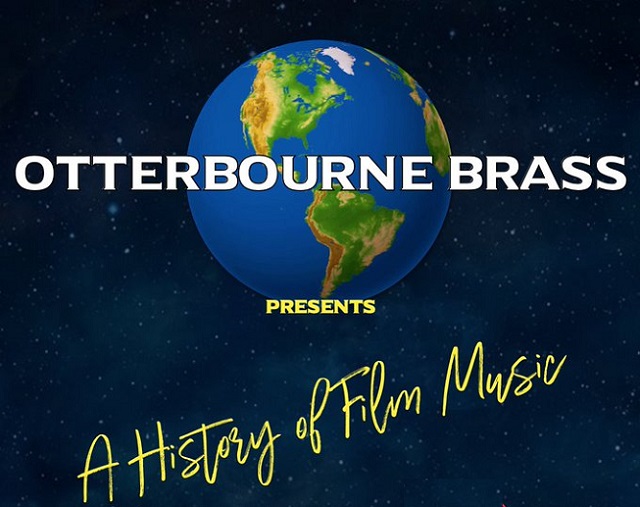 Music from the widescreen history of cinema provided the inspiration for this highly entertaining concert.

Thanks to the in-depth research work of MD, Mark Gibson, and the inventive use of the venue’s internal video system, the facts and myths, drama and passion of the musical scores and films featured were brought to life – aided by the splendid church acoustic and the excellent playing of the band.

From the RKO classic ‘King Kong’  to a funky arrangement by Meco of the familiar ‘Star Wars’  theme, it was much more than just a pop-corn selection box list of ‘favourites’ – although to be fair, few could complain that you could dip into the likes of ‘Lawrence of Arabia’, ‘Wild West’, ‘Where Eagles Dare’, ‘Batman’, ‘Crimson Tide’  and ‘Band of Brothers’.

the facts and myths, drama and passion of the musical scores and films featured were brought to life – aided by the splendid church acoustic and the excellent playing of the band.

MD Mark Gibson’s clever explanations of the comparisons between these scores and some present day brass band repertoire certainly raised an eyebrow or two – revealing a few of the dark arts of paying homage by sympathetic plagiarism.

The fine ensemble playing was also enhanced by outstanding solo performances from Bernadette Ralph on Christopher Bond’s arrangement of ‘Moon River’  on horn, and guest cornet Emily Wilson of the famous trumpet feature in the John Williams score to ‘Born on the Fourth of July’.

Mark Gibson took to his musical safari suit for the James Bond trumpet lead in ‘Live and Let Die’,  whilst the band encore of ‘Nearer My God to Thee’,  as possibly played by a small band on board the Titanic as it met its fate, prompted a poignant silence.

At a time when brass bands need to get out and attract concert goers more than ever, this was a great example of a hard working organisation using an inventive approach and polished presentation to do just that.