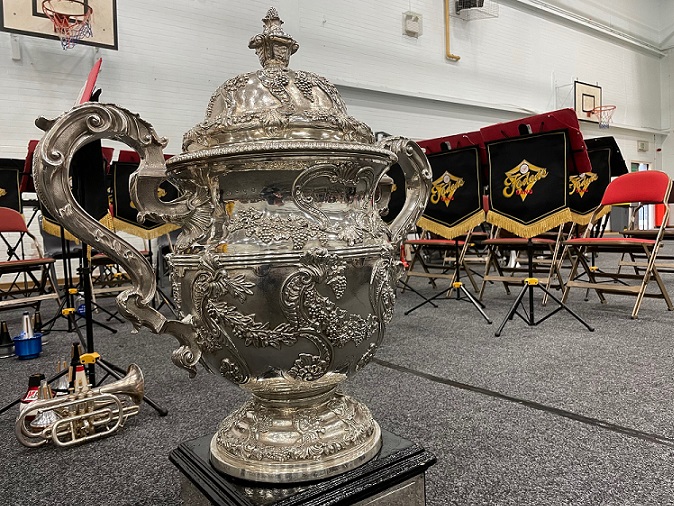 The enthusiasm to bag a prime seat was rewarded by the National Champion on polished form under the baton of guest conductor David Hirst, with a substantive programme offering stylistic variety to back familiar ensemble and soloist quality.

That was certainly shown with the opening items; the energised sparkle of the Eric Ball march ‘Star Lake’  and a waspish ‘Candide Overture’  that had a light touch of virtuosity.

The enthusiasm to bag a prime seat was rewarded by the National Champion on polished form under the baton of guest conductor David Hirst, with a substantive programme offering stylistic variety to back familiar ensemble and soloist quality.

Mark Wilkinson, Jonathan Bates and Gary Curtin were classy focal points on their offerings of ‘Don’t Doubt Him Now’, ‘Hora Staccato’  and ‘In Christ Alone’. They were aided considerably by the MD allowing the ensemble to provide a telling accompaniment that had presence but never submerged the solo voice.

The Roald Dahl inspired ‘The World’s Greatest Storyteller’, with its engaging balance mix of the serious and the fanciful brought the first half to a showy close.

An engaging detour to open the second half saw Foden’s embrace 1960’s counter-culture with a clever version of the Mamas & Papas ‘California Dreamin’,  followed by a trip to the sultry back streets of Buenos Aires for Piazolla’s ‘Oblivion’  led by flugel soloist Melanie Whyle and a 1920’s feline percussion trio of Mark Landon, Sam Iles and Anthony Mann with ‘Kitten on the Keys’.

The band’s 2021 Brass in Concert offering of their engaging ‘Into the Dark’  set was a welcome reprise – leading the listeners through Mussorgsky and Berlioz via Jekyll & Hyde to Broadway and Hollywood, with John Barber and his fellow soloists revelling in their cameo solo roles.

It was great to see Foden’s back in Stroud after a 15 year break. Hopefully it won’t be that long again before they return.