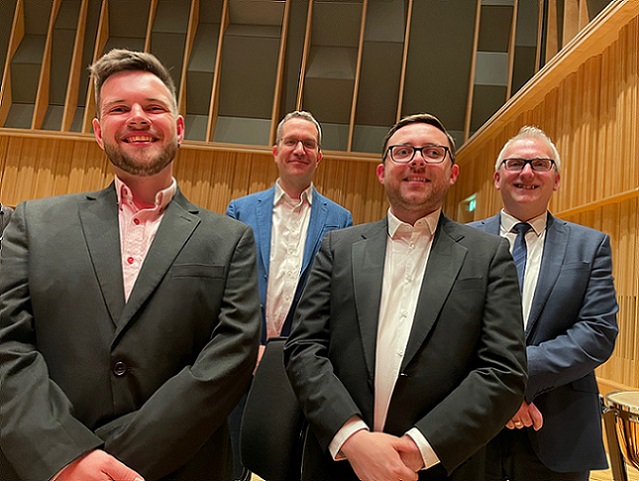 The musical link built between the Royal Birmingham Conservatoire and Tredegar Band has proven to been a particularly fruitful one over the past decade or more.

Students have gained invaluable experience playing for its Brass Band in Residence through a joint long term commitment to the performance of contemporary repertoire.

Head of Brass Amos Miller (with conductors above) has further strengthened the tie, with an appreciative audience enjoying major works from Philip Sparke, Johan de Meij and Gavin Higgins that brought ambitious substance to a heavyweight programme.

The current crop of RBC Brass Band students were led by Alan Gifford and Matt-Ludford King (studying for Masters in Brass Band Conducting) in ‘The Year of the Dragon’  and ‘Extreme Makeover’, after Ian Porthouse had led an energetic ‘La Peri’  opener.

Sparke’s thrilling celebration of Cory’s 1984 centenary has lost none of its vigour - right from the crack-shot salvos of the Coplandesque ‘Billy the Kid’ opening, although it was the languid playing of solo trombone Oliver Plant in the ‘Interlude’  that caught the ear before a well observed flight through the final movement.

David Childs’ performance of Philip Wilby’s ‘Zeibikikos’  made superlatives redundant – as is fast becoming the reaction created by Gavin Higgins’ ‘So Spoke Albion’  with its inspired palette of resonant colour, texture and sublimity – a work that taps deep into a furnace stream of molten technical complexities and searing emotion.

Tredegar’s horizons will take in the Proms this year – a brace of appearances which will include the pomp of the Strauss ‘Vienna Philharmonic Fanfare’  as well as works marking the 150th anniversary of Vaughan Williams (with an eagerly awaited CD to come).

Here they brought Paul Hindmarsh and Phillip Littlemore’s sympathetically realised ‘Suite’ from the wartime film ‘The 49th Parallel’  to life with evocative warmth – the famous ‘Prelude’  set as its close the ultimate piece of anti-fascist musical propaganda.

David Childs’ performance of Philip Wilby’s ‘Zeibikikos’  made superlatives redundant – as is fast becoming the reaction created by Gavin Higgins’ ‘So Spoke Albion’  with its inspired palette of resonant colour, texture and sublimity – a work that taps deep into a furnace stream of molten technical complexities and searing emotion.

The joint forces combined for ‘MacArthur Park’  to close – a great dollop of cake-mix bombast on an evening of serious musical intent.