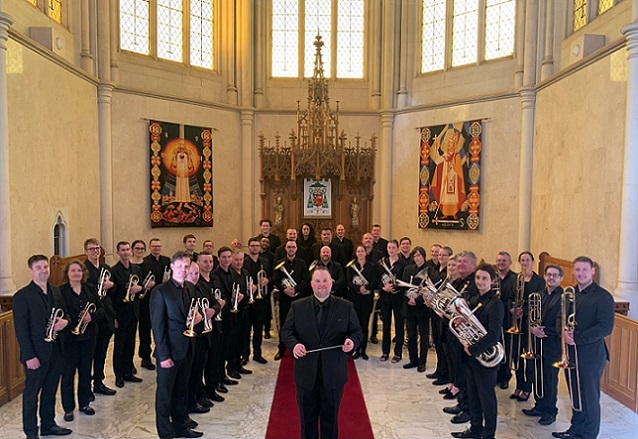 This engaging concert series pioneered by Dr Matthew van Emmerik has lived up to expectations – right from the opening sounds of  thrilling rendition of ‘The Bartered Bride’  (Smetana) played with stunning alacrity.

Contrast immediately came with Ken Smith’s arrangement of the Tallis ‘Third Mode Melody’  highlighting a deep ensemble quality. It was built on a gargantuan bass section with interweaving development building to an extended Amen close.

David Elton, principal trumpet of the Sydney Symphony Orchestra provided a superb world premiere of Andrew Batterham’s new ‘Trumpet Concerto’. His masterful versatility through the most delicate phrases in the second movement to the funk and nightclub style of the third was delivered both with beauty as well as frisky pizzazz.

His masterful versatility through the most delicate phrases in the second movement to the funk and nightclub style of the third was delivered both with beauty as well as frisky pizzazz.

The balletic drama of Arthur Bliss’ ‘Checkmate’ followed in a tempered reading, whilst great thought was given to a new work by award winning Australian composer Jared McCunnie. Entitled ‘Elegy’,  observing the tragedy at the Lindt Café in Sydney in 2014. The virtuosic display on  ‘A London Overture’  by Philip Sparke closed a demanding, deeply satisfying first half.

Andrew McAdam’s sublime flugel control in Esenvald's ‘Only In Sleep’  led into ‘Song Of Hope’  by Peter Meechan featuring David Elton, Mark Fitzpatrick and Marcus Salone. It was a timely and heartfelt reminder of a great talent lost too young.

More Sparke with his evocative ‘Mountain Song’  and Philip Littlemore’s bold arrangement of ‘Coronation Scene from Boris Godunov’  by Mussorgsky closed things off in triumphant fashion – with the encores of ‘Olympic Fanfare and Theme’  and ‘Deep Harmony’.

Bravo to all involved – from the production of Tim Kelly at Brassbanned and the Australian Digital Concert Hall, to the MD and his players.