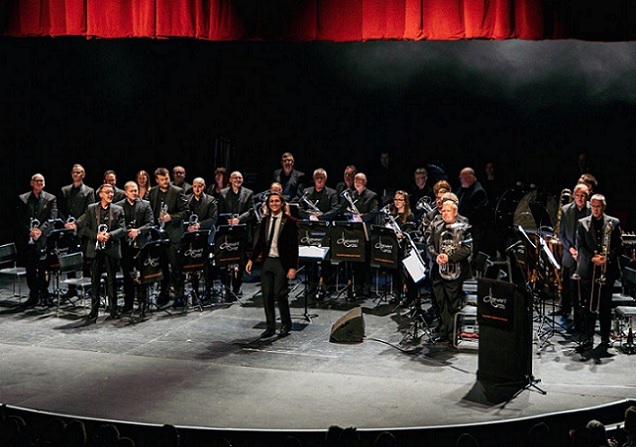 The first in a much-anticipated trilogy of celebratory 30th anniversary concerts saw Derwent Brass provide a night of extravagant entertainment to a sell-out audience.

The ‘Movies & Musicals’ theme was supplied in popcorn-sized bags of classy abundance, right from the opening sounds of the Silvestri score to ‘Marvel’s Avengers’  accompanied by multi-media presentation.

It set the pizazz high bar that MD Jack Captaff expertly jumped over time and again with an eclectic selection of music; from the ‘Star Trek’  reboot, ‘Enterprising Young Men’  to ‘Chevaliers de Sangreal’  from ‘The Da Vinci Code’,  and a lovely rendition of ‘Send in the Clowns’  played by principal cornet Dave Neville.

The ‘Movies & Musicals’ theme was supplied in popcorn-sized bag of classy abundance, right from the opening sounds of the Silvestri score to ‘Marvel’s Avengers’  accompanied by multi-media presentation.

Music Director Emeritus Keith Leonard (who inspired the band from the rostrum for 25 years) led on Ralph Vaughan Williams’ evocative ‘Prelude: 49th Parallel’,  before a wartime double bill concluded the first half with John Williams’ ‘Cadillac of the Skies’  and the title theme to ‘Pearl Harbour’.

The second half offered yet more widescreen inspiration; the bombastic thump of ‘Big Spender’  segueing into a 30-minute ‘Bitesize Broadway’  set that contained everything from Cy Coleman's ‘Sweet Charity’  to ‘The Rhythm of Life’  and ‘Baby, Dream Your Dream’  performed splendidly by guest singers Helen Perry and James Barrington Stephens. His own, ‘Bond meets Buble’, ‘I Wanna Live’  was a super closer.

That left a showreel of the unmistakeable ‘Imperial March’  from ‘Star Wars’  and ‘Rey’s Theme’  as the prelude to euphonium Matt Spriggs providing a splendid ‘Go the Distance’  from Disney’s ‘Hercules’.

A resonating ‘Anthem’  from ‘Chess’  and the iconic, ‘You’ll Never Walk Alone’  led into a foot-tapping ‘Brassed Off!’  ‘Clog Dance’  as an encore.

It rounded of the type of creative, polished entertainment that Derwent has become renowned for over the past 30 years. Two more concerts as good as this are to come as well – so make sure you book your tickets.