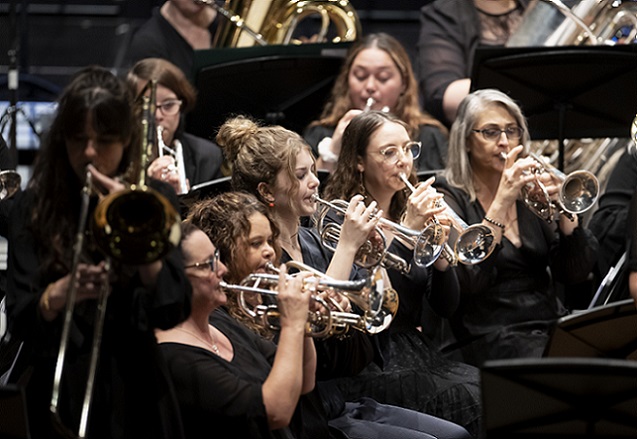 The Old Museum in Brisbane has held many memorable concerts in its history – one that stretches back to 1891.

This was an event that also deserves to be remembered for a very long time; a high-quality presentation of communication, musicianship and energy in abundance, led by two outstanding musicians in conductors Maureen Cameron and Phillipa Edwards.

Brought together over three weekends of rehearsal, the band presented a choice of repertoire that was carefully crafted to facilitate the talents of the individual sections of  a high class ensemble; seamlessly transitioning the audience focus from full band, through small internal groups to soloists.

Organiser Marissa Clarke, ably assisted by Julie Woods, were thanked for their tireless efforts in bringing the initiative to fruition. Having successfully brought together 38 of the best female brass and percussion players from around Australia, the warmth of the gratitude was tangible and richly deserved.

The knowledgeable compere, Annette Ries was hugely engaging; not afraid to champion Women in Brass and recognising its historical context by reading aloud a snippet from an early 20th century publication that ridiculed women who had the 'audacity' to play in a brass band, especially playing the tuba!

The response to the five strong tuba section, stood proudly in line, instruments held high to rapturous applause, spoke volumes – as did the whole ethos of the event.