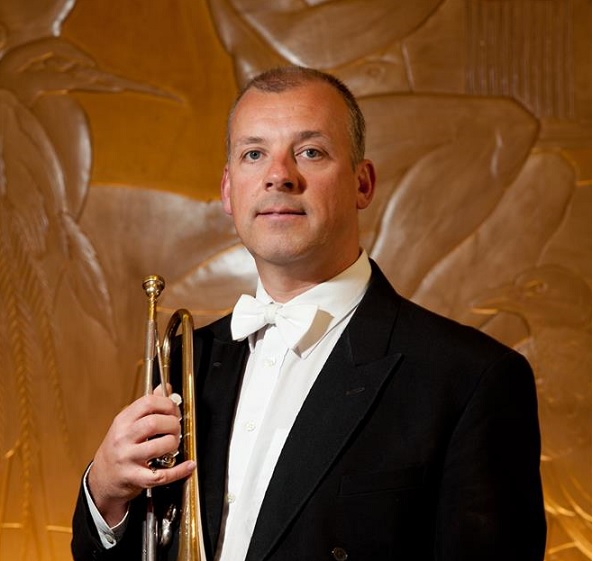 Rhys Owens was one of the most successful brass band exports to the orchestral world.

He retired as principal trumpet of the Royal Liverpool Philharmonic Orchestra after 30 years of outstanding performance service following a diagnosis of Motor Neurone Disease. He died in March 2022.

This heartfelt event lent further support to the fundraising efforts for the Motor Neurone Disease Association (Wales), and attracted family, friends, former colleagues, band players and music lovers thrilled by his playing throughout his career.

The fitting finale saw the massed symphonic ranks power through ‘Fest Music der Stadt Wein’  to end a fine remembrance with the bold brass brilliance that marked the playing of the performer they honoured.

A special symphonic brass ensemble of professional friends and students from the RWCMD in Cardiff opened the concert with a rousing rendition of ‘Fanfare for the Vienna Philharmonic’  followed by the tenderness of ‘Feierlicher Einzug der Ritter des Johanniterordens’.

Lewis Merthyr Band showcased the bombast and bubbling floridity of ‘MacArthur Park’  and ‘Toccata in D Minor’  as well as a neatly conceived premiere of ‘The Curious Case of the Wolf & The Hawk’, inspired by a 1985 film starring Michelle Pfeiffer.

BTM Band meanwhile balanced ‘Prelude on Tallis’  with Bruce Broughton’s ‘Harlequin’, a lovely rendition of ‘I Know Thou Art Mine’  with a colourful ‘Neapolitan Scenes’.

The fitting finale saw the massed symphonic ranks power through ‘Fest Music der Stadt Wein’  to end a fine remembrance with the bold brass brilliance that marked the playing of the performer they honoured.