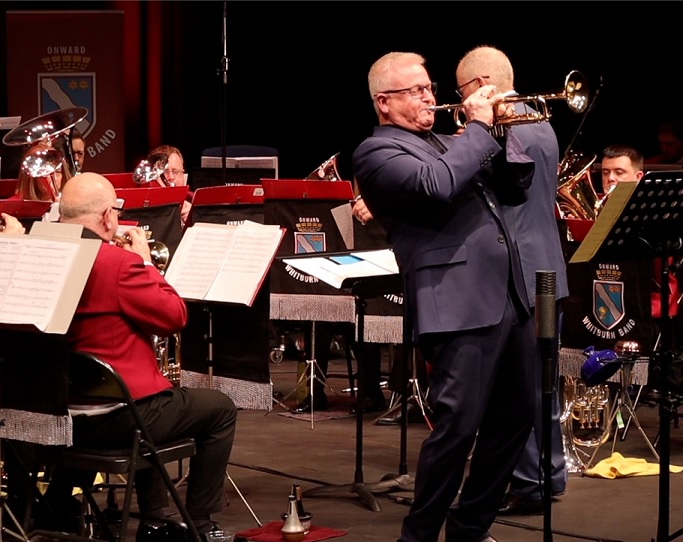 When Whitburn Band reached its 150th anniversary in 2020 they hoped to celebrate the landmark with a major concert featuring trumpet superstar Mike Lovatt.

Covid-19 intervened, and whilst the band took the opportunity to embrace modern technology to connect with supporters worldwide during the hiatus, nothing was going to replace a live celebratory concert with him on the doorstep.

Led by resident musical director Bryan Allen, the global inspiration was retained by Peter Graham’s ‘Windows of the World’  suite interspersed with stunning solo items from their welcome guest.

The Scottish Open champion was certainly inspired to emulate him; the opening ‘Amazonia’, displaying crisp, articulate playing built on an excellent percussion and bass end foundation.

Matt Hall’s ‘Nightingale Dances’  had formed a cornerstone of the band’s winning programme in the 2021 Cory Online contest, and it was a sumptuous inclusion here with its close-knit harmonies and pulsating drive.

Clearly relaxed and enjoying himself, the star was on scintillating form; the upper echelons of the stratosphere explored with glorious certainty, the ‘Louis Armstrong Medley’  played with perfect ‘Satchmo’ style and stevedore stamina.

Pieces from Mike Lovatt’s acclaimed CD, ‘56 Degrees North’  provided much of the material for his inserts. Arranged by his great friend Colin Skinner, they were a showcase of virtuosity –all played out to an awestruck audience that included Colin’s proud parents.

Clearly relaxed and enjoying himself, the star was on scintillating form; the upper echelons of the stratosphere explored with glorious certainty, the ‘Louis Armstrong Medley’  played with perfect ‘Satchmo’ style and stevedore stamina.

The lyricism of ‘Pure Imagination’,  was as golden as a Willy Wonka prize ticket for those lucky enough to purchase one for the concert, and cleverly inserted into proceedings, whilst the cameo solo spots from the Whitburn ranks were also played with considerable elan. ‘Earth Song’,  provided an ensemble cast finale led by the star, backed once more by cracking percussion work.

Mike’s friendship with the late Ryan Anthony, formerly of Canadian Brass was marked with generosity of spirit, as he was joined by Chris Bradley and Alex Ramsay in a moving rendition of ‘Song of Hope’.

The encores were much appreciated and saw the virtual and real worlds of 2020 and 2022 converge in Lionel Ritchie’s ‘All Night Long’,  synchronised expertly on screen and stage.

It provided a thrilling climax. That two year wait really was well worth it.