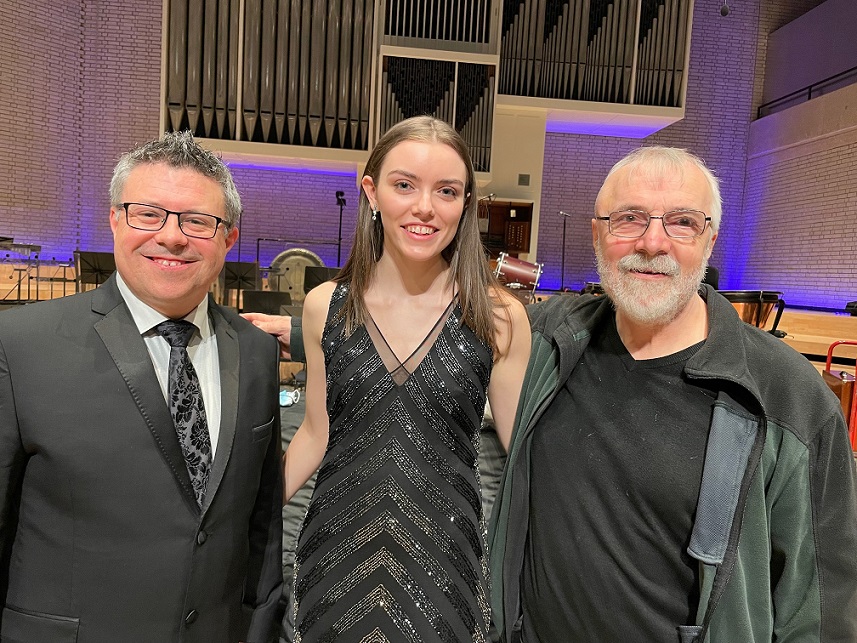 A quartet of well overdue revivals formed the basis of the ‘house’ brass band’s impressive contribution to the RNCM Brass Band Festival weekend.

Judith Bingham’s cleverly characterised ‘Four Minute Mile’ – complete with the crack of the starting pistol and final lap bell, was paced to Roger Bannister perfection by the elegant calibrations of conductor Miguel Sepulveda.

The ‘great vigour’ adrenaline start line surge soon found its mid-distance tempi, leading to a late lactic thrust to broach the finishing line – the players breathless by the exertions, the MD remarkably poised and unruffled.

Justine Gormley (above) is a first year RNCM Masters student, and her maturely composed rendition of Bill Connor’s breezy ‘Piano Concerto’  was a deliberately light-touch delight (as was the composer’s comedic pre-performance introduction and the sympathetic ensemble accompaniment of Afonso Teles’ well observed direction).

The crisply articulated thematic helixes of the opening contrasted with the languid reflections of the lyrical central section. Whilst the finale meandered into the occasional cul de sac, the soloist’s cultured ability to neatly inject pace and waspish vibrancy brought things to an uplifting close.

Hopefully, Errollyn Wallen MBE can be persuaded to write another major work for the medium. It will need planning though, as her current schedule includes two operas currently in rehearsal. It will be well worth the wait.

‘Chrome’  resonated in every corner of the RNCM Concert Hall; its pulsating ground bass foundation providing an incessant rhythmic underpinning.

It in turn allowed David Thornton to skilfully build the layers of colourful tonality safe in the knowledge that it would never collapse under its obvious structural complexities.

It was left to Malcolm Arnold’s sardonic ‘Scottish Dances’  to round things off with a highland fling of wit and whisky galore; the snaps and reels contrasting with homely Hebridean lyricism and a touch of Glaswegian St Trinian mischief.