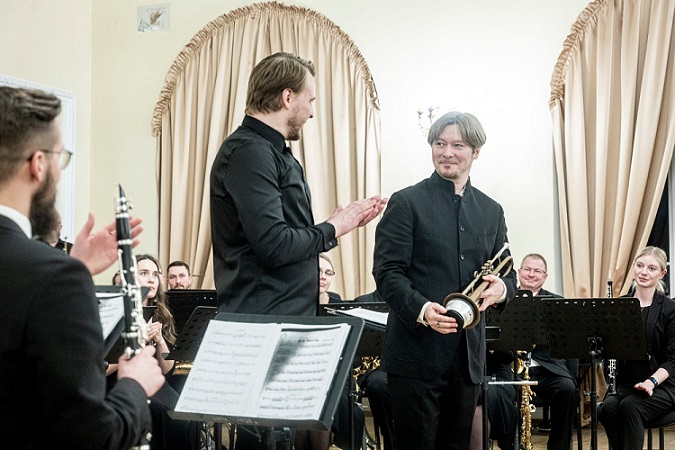 His distinctive, operatic playing style made an indelible impact during his distinguished career - one which included the first commercial recording of the famous Arutiunian ‘Trumpet Concerto’. Dokshizer spent the last years of his life living in Vilnius becoming involved in Lithuanian culture.

This dedicated concert in a packed Great Hall Theatre featured the incredible talents of Sergei Nakariakov, a performer whose modern-day influence equals that of his illustrious predecessor.

It was therefore appropriate that the celebratory centrepiece was a superbly realised reprise of the 'Concerto', played with flamboyant ease and irrepressible energy. The ovation spoke of the admiration of the brilliance of the performance.

It was therefore appropriate that the celebratory centrepiece was a superbly realised reprise of the 'Concerto', played with flamboyant ease and irrepressible energy. The ovation spoke of the admiration of the brilliance of the performance.

Earlier the orchestra opened with the specially commissioned fanfare ‘Gradatim Ferociter‘ by Linas Rupšlaukis, featuring 20 trumpters, followed by an uplfiting ‘Jupiter‘ by Holst. In addtion there was an evocative reading of 'October‘ by Eric Whitacre and the intensity of 'Dirty Dancing' by Torstein Aagaard Nilsen.

The following day Nakariakov paid further homage with a masterclass held at the Lithuanian Academy of Music where fortunate delegates and students were able to perform with him.