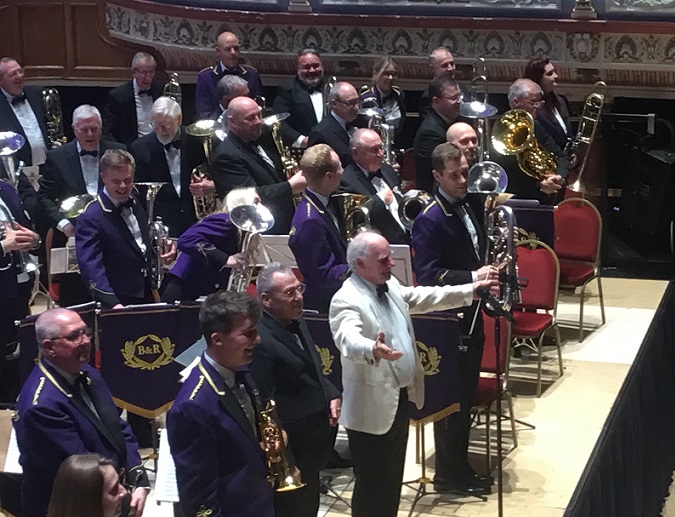 18 months after Brighouse & Rastrick was due to celebrate the 75th anniversary of its famous massed band series of annual concerts, the West Riding ensemble finally got the opportunity to do so in the presence of old friends.

That was the case for both players and audience alike (and given current Covid-19 circumstances it was an encouraging number) with the current band joined on stage by former members and conductors.

The future promises much for the current line-up, but for this night it was nostalgia that took centre-stage – old favourites dusted off and spiced up to give a fresh lollipop taste.

Everyone enjoyed the experience.

The tone was set with the joyful bravura of '76 Trombones' and quick-fire 'Thunder & Lightening' polka which bookended a well-mannered overture to 'Barber of Seville' – so well paced and styled.

After the interval 'Fest Musik De Stadt Wein' pinned the ears back, the razzmatazz of highlights from 'West Side Story' and 'The Magnificent Seven' brought a touch of Hollywood widescreen technicolour, whilst 'Watching the Wheat', 'The Old Rugged Cross' and 'I'll Walk with God' offered well-tempered contrast.

Derek Broadbent's first stint with the baton showcased his arrangements of 'Romance' from 'The Gadfly' and the horn led Beatles classic, 'Hey Jude', before a nod of appreciation to Elgar Howarth via the pseudonym fun of 'Pel Mel'.

After the interval 'Fest Musik De Stadt Wein' pinned the ears back, the razzmatazz of highlights from 'West Side Story' and 'The Magnificent Seven' brought a touch of Hollywood widescreen technicolour, whilst 'Watching the Wheat', 'The Old Rugged Cross' and 'I'll Walk with God' offered well-tempered contrast.

William Rimmer's arrangement of Liszt’s 'Les Preludes' built with evocative drama brought a standing ovation and meant that encores were demanded and delivered with a smile and touch of audience participation.

It sent everyone on their way with a spring in their step. Brighouse brought back happy memories on the night for all involved but also laid out a fine case for the future of this event too.