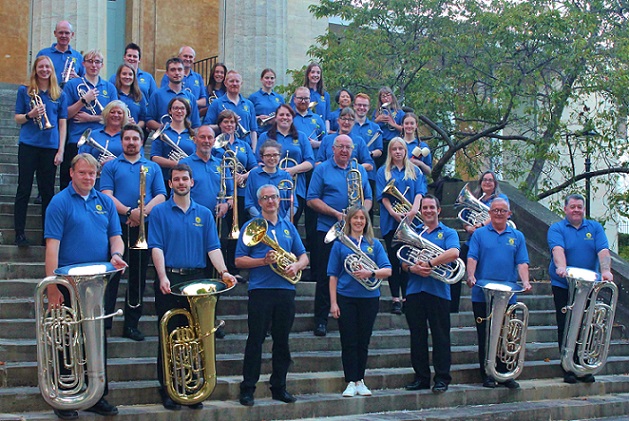 They opened under MD Craig Roberts with Alan Fernie's resonant ‘Prismatic Light’, the acoustic of the refurbished venue filled with sound.

Bristol composer David Bedford's ‘Requiem’ was a poignant rendition of a tragic story, with angry repetitive lines against resonant chords and evocative percussion which sat in contrast to the brilliantly acted out, ever diminishing ‘Berne Patrol’ by Elgar Howarth.

The second half was conducted by outgoing MD Ian Holmes, who is looking forward to continuing his 20-year association with the band in a new capacity.

The world premiere of ‘Of Far Flung Skies’ by Laura Shipsey has the result of a collaboration (part of the Adopt a Composer initiative run by Making Music) that had been delayed by Covid-19 restrictions.

This was her first piece for the medium and she shared her thoughts on the process and link to the band. The title, as well as haunting ending, with its repeated motifs was inspired by the lone gold star in the roof of St Georges, where a bomb fell during the Second World War.

The title, as well as haunting ending, with its repeated motifs was inspired by the lone gold star in the roof of St Georges, where a bomb fell during the Second World War.

Currently studying for a PhD at Cardiff University, she is a violin player and the intricate influences of her orchestral background shone through, giving a fresh and evocative approach. It also featured the City of Bristol Learners Band playing from the gallery; the soundscape awash with inventive effects and colours.

‘I Wish I Knew How It Would Feel To Be Free’ arranged by Alan Fernie brought joy to follow whilst contrast came with Handel Parker’s ‘Deep Harmony’ and the rousing sounds of ‘Highland Cathedral’ arranged by David Lancaster and featuring flugel soloist Zoe Brittlebank.

The light atmosphere culminated with ‘The Floral Dance’ to round off a concert that demonstrated just how much potential there is for brass bands to successfully reach out to new opportunities and listeners.