Band of the Prince of Wales 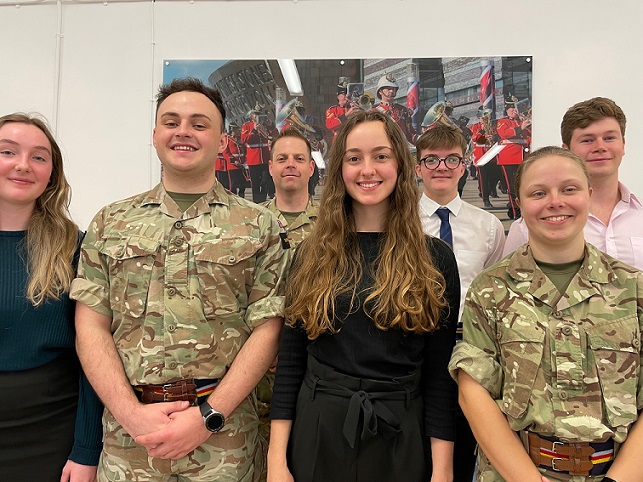 The Band of the Prince of Wales is one of three brass bands in the British Army. Part of the Corps of Army Music they have become increasingly attractive destinations for young musicians looking for well-paid musical employment linked to career development pathways.

The move earlier this year to the historic Army town of Brecon has seen them undertake a series of recruitment drives around Wales as well as establishing roots within the local community -  with the ensemble rehearsing at the concert venue each week and players allowed to make long term links to civilian bands.

It's a commitment that is already paying dividends – with a good sized audience in attendance for this free lunchtime concert and with the playing ranks boosted by six youngsters and adults aged between 17 and 22 (pic above) who had enjoyed a couple of days of career awareness with them.

The music was provided to engage as well as inform – the presentation of the personable conductor, WO1 David J Hatton aided by neat multi-media work.

It's a commitment that is already paying dividends – with a good sized audience in attendance for this free lunchtime concert and with the playing ranks boosted by six youngsters and adults aged between 17 and 22 who had enjoyed a couple of days of career awareness with them.

The repertoire understandably had a little bit of something to tickle Welsh tastes with ‘David the White Rock’ and Darrol Barry’s ‘The Devil’s Bridge’ neatly contrasting with Tom Davoren’s ‘Legacy’, supplemented by a backdrop of Aneurin Bevan images and quotes.

And although the audience didn’t quite know what to make of ‘The Mandalorian’ (only Zero Mostel and Gene Wilder seemed to be missing from the never ending list of its producers), they certainly appreciated the talents of Cpl Mike Altree on euphonium with a lyrical ‘In Christ Alone’ and Mus Ellen Smith with a sparkling multi-percussion rendition of ‘Kopanista’.

Plenty to enjoy too with the ‘Shining Sword’ opener and the neat contrasts offered by ‘Let’s Face the Music and Dance’ and ‘Balkan Dance’, whilst Rob Wiffen’s ‘Dragon’s Prelude’ to close was a selection box of Welsh ‘hwyl’ that would have helped the local South Wales Borderers repel the Zulu hordes at Rourke’s Drift.

To find out more about the Prince of Wales Band career opportunities go to:
https://docs.google.com/forms/d/e/1FAIpQLSeB--FBTPundkw4SoLJbVUJJaC932E5qUsK1X3KRuqsZBgjBw/viewform