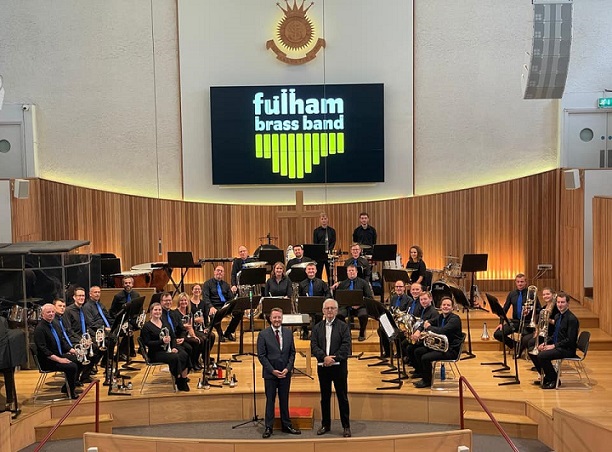 Fulham Brass are no strangers to Regent Hall, having previously presented concerts featuring music by Wilfred Heaton and Peter Graham. They returned this year on the eve of the National Final for a programme devoted the contest’s test-piece composer Bruce Broughton.

Fulham’s musical ethos is led by their MD John Ward, who is spearheading a series of innovative initiatives that deserve appreciation. This was another fine example, with the composer himself in attendance.

'Fanfares, Marches, Hymns & Finale' (arranged by Jock McKenzie) was written for Bay Brass, with the first movement’s cinematic style in evidence as a confident band was put through its paces.

Chris Avison, Principal Trumpet of the Bournemouth Symphony Orchestra is a familiar figure to London audiences, having played with the Enfield Citadel Band while undertaking his studies. He impressed the substantial audience with a stunning rendition of  'Excursions' - the busy writing offering the soloist little respite but plenty of opportunity to shine.

He impressed the substantial audience with a stunning rendition of  'Excursions' - the busy writing offering the soloist little respite but plenty of opportunity to shine.

Sat next to Bruce during the evening was Peter Graham, who arranged the film music  'Alone Yet Not Alone' for Black Dyke.  Solo baritone Jonathan Barker presented the opening melody, making it a neat contrast with the more energetic items framing it in the programme.

'Covenant' was an effective take on an old American song by Lowell Mason, the first American Doctor of Music. Full of dynamic contrast with clashes between major and minor thirds prominent from the outset, it featured controlled playing.

'The Prayer Meeting' meditation built around  'Amazing Grace', features a melody that only appears in its entirety once, and then in an adapted form. Used to convey various moods and reactions, with unexpected harmonies moving further away from the conventional sounds, on this occasion it had been adopted to give a more prominent role to the trumpet soloist.

It led into the final item - 'Music from Tombstone', drawn from the celebrated film. Percussion plays a prominent role with the xylophone, and these fine contributions were added to by the flugel and cornet in a more reflective section before the music concluded in majestic fashion.

Tribute was made to the Broughton family's musical heritage with an account of  'The Role Call', by Bruce's grandfather William to round off an excellent concert.