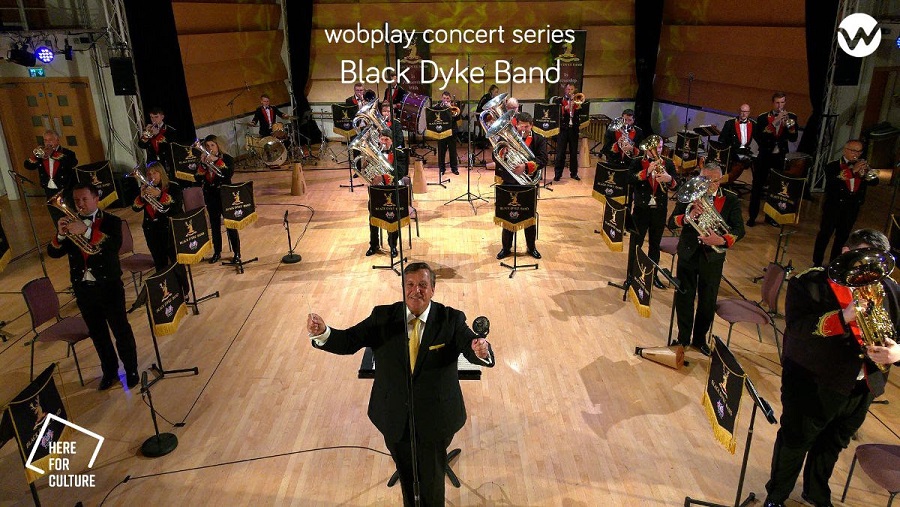 Although not officially released until the end of last month, this Wobplay.com ‘Concert Series’ performance was recorded in mid-July with appropriate Covid-19 protocols in place at Leeds Conservatoire.

As with those given by Cory and Tredegar, the Yorkshire band was asked to provide a distinctive identity mix of repertoire – in this case, given the obvious performance restraints (the recording space itself looking like a rather utilitarian foyer), with an emphasis on the tried and tested.

That said, there was certainly a distinctive stamp to the MDs approach to the famous  'Queensbury'  signature march - especially with its grandiose ‘pull-back’ before the final reprise. You could almost feel the musical ire being raised of the more traditional ‘Pondashers’ with its stately sense of circumstantial pomp.

The two main course contributions came from a florid, if occasionally uneven  ‘Russlan and Ludmilla’  overture and an embryonic  ‘Variations on an Enigma’  – understandably so given that it was in preparation for the band’s high-profile appearance at Snape Maltings a month after this recording.

The impressive stanchion points were on display, if on this occasion it lacked the usual showcase polish needed to really thrill with virtuosity.

The tender beauty of the ‘Song from Sarajevo’ had an aching sadness, whilst the ‘Zeibekikos’ Greek dance was delivered with remarkable clarity – a plate licked clean of needless smash and grab accelerant – and all the more musically satisfying for it.

No such qualms though with the two outstanding solo performances: Richard Marshall, who must have an encyclopaedic memory-bank of solos, producing an elegantly capricious rendition of Terry Camsay’s  ‘Melody of the Heart’, poised with delicacy, with Daniel Thomas revealing a maturity of understanding in two movements from Philip Wilby’s  ‘Euphonium Concerto’.

The tender beauty of the  'Song from Sarajevo’  had an aching sadness, whilst the  ‘Zeibekikos’  Greek dance was delivered with remarkable clarity – a plate licked clean of needless smash and grab accelerant – and all the more musically satisfying for it.

And whilst the James Bond inspired  ‘Black Dyke at the Movies’  is now due for a timely franchise update (perhaps in time for Daniel Craig’s final outing) , it still retained just enough piquant flavouring in the dry martini mix to make it an enjoyable mouthful of fun.