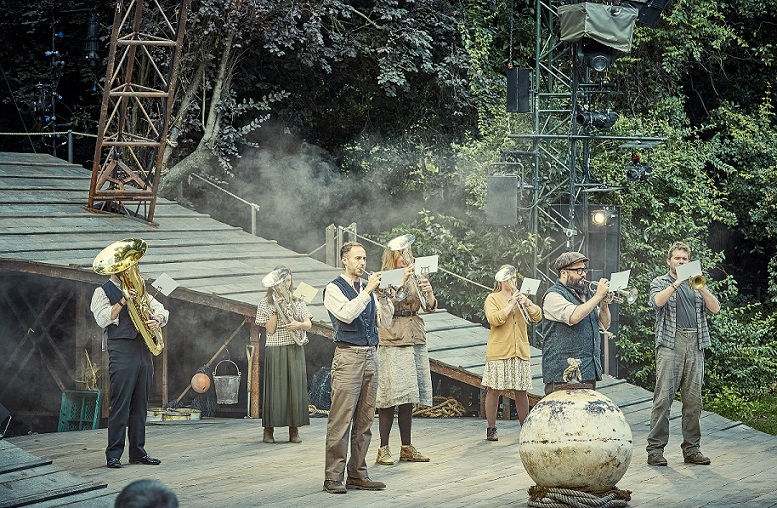 With the cogs of the music industry tentatively breaking into gear from the rust of Covid-19 inactivity, it was something of an intriguing delight to hear that a brass band would be performing as part of this innovative open-air production at London’s Regent’s Park.

Rogers and Hammerstein’s ‘Carousel’ was first performed on Broadway in 1945 – transplanting Ferenc Molnar’s play ‘Liliom’ from Budapest to Maine, becoming a worldwide hit with critics and audiences alike in subsequent years.

The recipe is almost flawless. What’s not to like about a show that has a timeless old story packed with great songs sung by great performers?

Reimagined by Timothy Sheader the production retains the atmosphere, charm and pizzazz of the original with occasional neatly observed twists - the revolving industrialised set giving things a gritty feel of an impromptu modern day ‘festival’ attraction.

That said, the story is a familiar to lovers of the musical genre - topped off with the crowd pleasing finale of  ‘You’ll Never Walk Alone’  which was taken up in the early 1960s by the pop group Gerry and the Pacemakers to later become the ‘anthem’ of Liverpool Football Club.

Reimagined by Timothy Sheader the production retains the atmosphere, charm and pizzazz of the original with occasional neatly observed twists - the revolving industrialised set giving things a gritty feel of an impromptu modern day ‘festival’ attraction.

The small 13 strong ensemble play an integral role throughout, with Andy Barnwell of Music Coordination Services Ltd picking a high-class selection of players, many well known to the brass banding world, such as David Geoghegan, who leads or cornet/trumpet and soprano with delightful artistry on a score of real impact arranged by Musical Supervisor and Conductor, Tom Deering.

The playing (as well as the acting) was first rate stuff from everyone – backed by Mike Parkin on percussion with the likes of Lindsey Kempley on tenor horn, Jane Salmon on baritone and Beth Calderbank on euphonium.

It all makes for a gritty, honest production (with neat contemporary updates) that feels particularly relevant in these somewhat troubled times.

Lots to enjoy (its runs until September 25th) – especially for those with a keen ear for classy brass.