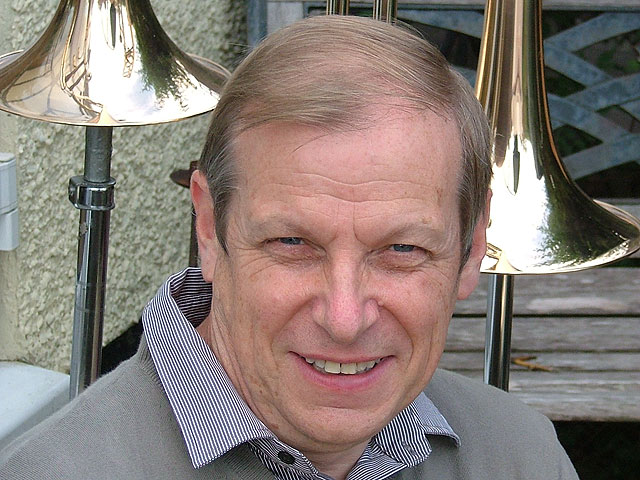 Led by Andrew Blyth, the 40-strong chorus had a good balance of male and female voices and excellent diction, their young voices producing an attractive sound in repertoire varying from devotional items to Andre Crouch's vibrant 'You Can Depend on Me', despite the handicap of their accompanists being un-sighted.

Particularly striking was a new version of 'How Much More' and a setting of 'And Can It Be'.

The band opened with 'Concertante for Cornets and Band', with eight soloists ranged at the front of the stage. William Himes' 'To the Chief Musician' was performed at the first Hendon Highlights and made a welcome return, with its combination of speaking, singing and playing. The central setting of 'I Bring My All' was exquisite, and the female soloist in the final movement projected well over the band.

Dudley Bright (above) introduced his own solo 'Life's Command', explaining the inspiration behind it as the protagonist aims to live up to the aspiration 'Follow, Follow, I Will Follow Jesus'.

After initial uncertainty, an extended cadenza introduces the melody 'O I Love Him', and with it a growing confidence and commitment. It was a fine rendition, sympathetically accompanied by the band.

Andrew Wainwright's 'Variations on Was Lebet' brought the first half to a close in a reading that drew the disparate sections together effectively, particularly impressive in the sparkling fugue.

The band's final item was 'No Other Name', as impressive today as when the New York Staff Band introduced it on their 1960 tour.

Andreas Holmlund's energetic setting of 'Praise the Lord' preceded 'Still', conducted by composer Andrew Blyth, and the exuberant 'Go Down Moses', with a fine flugel solo.

Dudley was joined by pianist Andrew Gaudion in Ray Steadman-Allen's 'Walk With Me', a reflection on the Walk to Emmaus, the sensitive playing of both making this one of the highlights of the evening.

The band's final item was 'No Other Name', as impressive today as when the New York Staff Band introduced it on their 1960 tour.

After a little uncertainty in the opening, it soon settled down into an accomplished account as the familiar melodies combined to celebrate the power of Jesus' name.