Conductor David Langley is to start a new chapter of his career in Dubai.

Blaenavon Town Band has said a fond farewell to Musical Director David Langley who is to relocate to Dubai to take up a post at a British International School.

Born and bred in the Welsh valley town he has been associated with the band since the age of seven and was a product of its youth band as well as the Greater Gwent Music Service.

After gaining a BMus degree at Cardiff University and a PGCE at Bath Spa University until recently he taught at Monmouth Comprehensive School as well as conducting musical ensembles both in south Wales and in the west of England.

He conducted the band for short spells before he was appointed as permanent Musical Director in 2017, leading them in many community events as well as gaining a podium finish at the 2018 Welsh National Eisteddfod in Cardiff.

A band spokesman told 4BR: "David has been a cornerstone of the organisation for over 20 years and everyone would like to extend their sincere thanks and best wishes for all he has achieved as he embarks on a new career.

We know he was particularly proud to be the latest in a line of local Musical Directors of his 'home town' band and there will always be a welcome for him with us in the future." 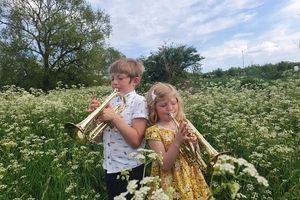