A new work from the pen of the talented Dutch euph star and conductor has won the inaugural International Brass Band Composer Competition.

The Dutchman who made his reputation as the star euphonium player and more latterly as conductor with Brass Band Schoonhoven simply said "Wow!"on posting the news on his Facebook site.

His work, 'Capriccio for Brass Band' took both the overall first prize as well as the Public Commendation Award after the initial list of 92 worldwide entries was whittled down to five high quality finalists alongside Rebecca Lundberg, Marcus Venables, Morten Jonas Wallin and Andy Wareham.

Judges, James Curnow, Dr. Liz Lane and Paul Hindmarsh, were unanimous in their verdict, with Dr Liz Lane saying: "I thoroughly enjoyed getting to know this diverse collection of new music.

The five contrasting scores were outstanding and would all be an excellent addition to the brass band repertoire. However, we were in unanimous agreement that 'Capriccio' had the mix of ingredients which made it stand out as a winner; exciting and immersive for band and audience, accomplished writing and with plenty of character."

Paul Hindmarsh was in agreement: "'Capriccio' is a very worthy winner. It is inventive, full of spirit, skilfully crafted and brilliantly scored. Robert's experience at the heart of the band on euphonium pays great dividends.

I'm keen to programme 'Capriccio' at the RNCM Brass Band Festival and would love to hear more of his music."

In summing up the competition, James Curnow added: "I must admit, when I was first asked to serve on the panel, I was a bit sceptical regarding the number and quality of pieces we would receive. I was therefore extremely pleased to hear the 92 compositions and arrangements.

To receive this large number of quality works, from so many countries around the world, certainly adds to the status of this very worthwhile endeavour."

Robbert wins £100 in cash (sponsored by Besson), a download license to NotePerformer, and publication of his work through BrookWright Music — www.brookwrightmusic.com — whilst also receiving any associated royalties.

He also takes away the 'Public Commendation Prize' which was voted for by viewers on YouTube, the prize being a £100 gift voucher towards a Geneva instrument.

A 'follow the score' video of 'Capriccio for Brass Band' can be heard at: https://www.youtube.com/watch?v=yZSPi_kNRgQ

The other finalist's works can also be enjoyed at:

Nocturne for Brass Band — The Lady with the Lamp (Andy Wareham0
https://www.youtube.com/watch?v=wvSTxnwrLZs

'Capriccio' is a very worthy winner. It is inventive, full of spirit, skilfully crafted and brilliantly scoredPaul Hindmarsh

In reflected on the success of the competition, organiser Andrew Wainwright told 4BR: "I would like to thank everyone who entered the competition which I hope will become an annual event.

I was thrilled with both the number of entries and the high standard of pieces submitted, with the discussions between the judges indicating that it was a very difficult decision to narrow down to just five finalists.

Many congratulations go to each of the finalists and in particular Robbert Vos for his winning entry.

I would like thank James Curnow, Dr Liz Lane and Paul Hindmarsh for the time and expertise they committed to the competition. Last but not least, a big thank you to our sponsors: Besson, Geneva, Wallander and BrookWright Music." 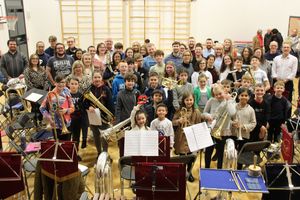