Heaton music to be showcased in Bergen

A brace of concerts by Eikanger- Bjørsvik Musikklag and Bjørsvik Brass will showcase the music of Wilfred Heaton later this month.

Following on from their recent live-streamed concert success, Eikanger- Bjørsvik Musikklag has announced that it will link up with its sibling organisation Bjørsvik Brass for a brace of concerts to be held in Bergen at the end of the month (Sunday 27th September).

Both will be featuring the music of Wilfred Heaton to open their new concert seasons.

At 5.30pm (local time) and as part of a concert at Eidsvag Church, Bjørsvik Brass led by conductor Magnus Brandseth will present the Norwegian premiere, and only the second live performance, of 'Lento', a new version for brass band of the slow movement of Heaton's still unperformed 'Piano Sonata'.

Both items have been prepared by Paul Hindmarsh, who told 4BR: "In these strange times I was delighted to be contacted by the bands about these 'new' Heaton scores.

'Pilgrim Variations' is a second suite that I have drawn from Heaton's 'Pilgrim's Song' music. The score only came to light in 2012, when it was discovered in the effects of the composer's sister after she passed away.

It contains 19 short items for solo piano, brass ensemble and unaccompanied choir and was written for the Salvation Army officer training college in Johannesburg.

The Heaton family asked if I would produce a suite with narration and this was recorded using the original title."

Paul added: "However, for some time I've wanted to build a piece for brass band out of this lovely music. The Covid-19 lockdown provided the opportunity. The larger items are all based on the tune 'Monksgate', so I've entitled the second suite 'Pilgrim Variations'.

It's more straightforward to play than most of Heaton's music, but it bears the hallmarks of his best writing, particularly the items that were originally composed for piano. I'm thrilled that Eikanger will be giving the world premiere."

The first part of the concert includes two band classics, Holst's 'Suite in E flat' in an arrangement by Svien Henrik Giske and Reid Gilje and Percy Fletcher's 'Epic Symphony'.

An all-Heaton second half comprises the march 'Le Tricot Rouge', the rarely played 'The Children's Friend', 'In Memoriam' by Arthur Sullivan, and to finish, the premiere of 'Pilgrim Variations'.

Meanwhile, Bjørsvik Brass will be celebrating their return to the concert platform with a programme that includes Simon Dobson's 'Penlee', Leslie Condon's 'The Present Age', and movements from 'A Lowry Sketchbook' and 'Gallery', as well as Heaton's 'Lento'.

Paul added: "Without question 'Lento' is Heaton's darkest, most intense slow movement and at 10 minutes, his longest. Composed in the early 1950s it forms the slow movement of a 30-minute 'Piano Sonata' — two movements of which Heaton reworked from the music that later became 'Partita'.

In some ways it is like a secular equivalent of a Salvation Army meditation, with a beautiful hymn-like melody providing the basis for a series of contrasting contrapuntal episodes. The climax is dissonant and visceral, but gives way to a haunting Mahlerian conclusion."

Although he is unable to travel to Norway for the events, Paul added that he was delighted the worls were being performed. "I've fond memories of hearing Eikanger give the first performance of Howard Snell's realisation of 'Variations' and my edition of 'Five Little Pieces' back in 2002 with Howard conducting.

Hearing 'Lento' for the first time in Norway alongside some of my favourite brass band pieces would have made my year!" 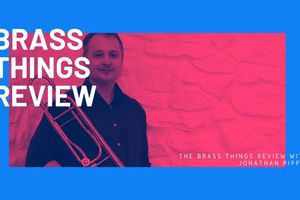