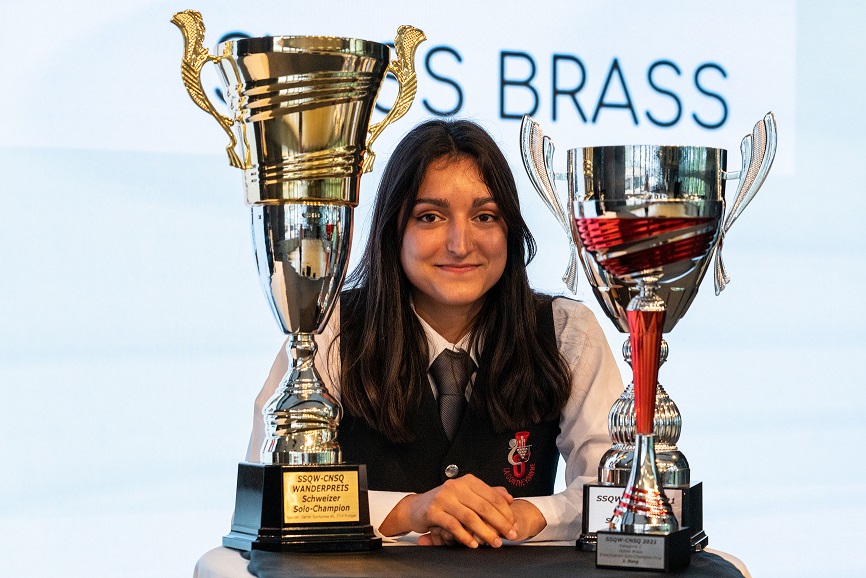 When did you start playing and do you come from a musical brass band family?

It is a kind of tradition in my family to play music. My father plays the cornet, as did my mother in her youth in her native village. When I was little I even had the chance to play with my grandfather in the village brass band.

I started playing the cornet at the age of 8 and I have three siblings, who all play music: my sister Emma on baritone and my brothers Julien on trombone and Loïc on percussion.

All this and one of my uncles and several of my cousins also play in the village band, which makes music the foundation of our family.

Who has taught you over the years? Did you get lessons in school as well?

Since I started, I have enjoyed lessons with Yvan Lagger, who is also the conductor of my village band.

In high school I joined the music class which allowed me to learn about score analysis, history and other aspects of music.

I’ve also had the opportunity to take theory lessons at the conservatory of Sion up until the end of my high school education. 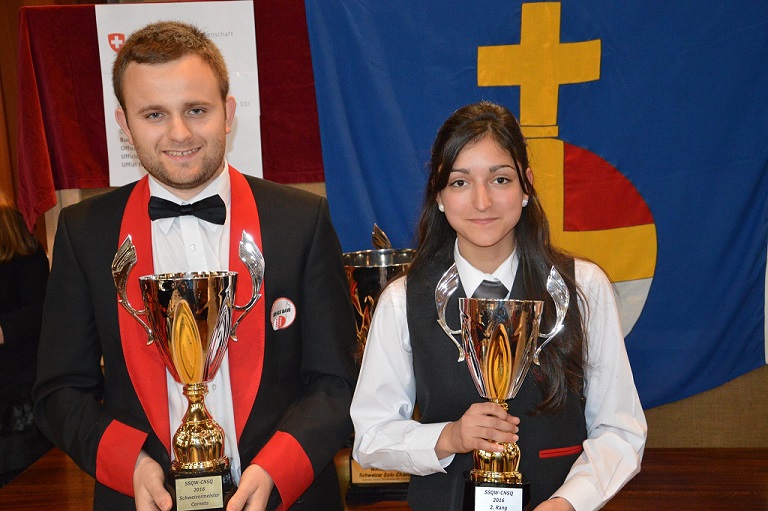 Mathilde was the 2016 Junior Solo Champion

How did you make progress from your local village band to Brass Band Treize Etoiles – and do you still play in other ensembles?

I have always tried to work with purpose and regularity. I’ve participated in competitions since the age of 10, which helped me to improve quickly, especially by having the opportunity to listen to older soloists which gave me the desire to reach their level.

That gave me the opportunity to improve further by playing more difficult pieces, and in 2017, I joined Brass Band Treizes Etoiles and have worked hard to improve with them ever since.

I joined Brass Band Treizes Etoiles B at the age of 13, and a year later, the Constellation Brass Band, which competed in the Excellence Category at the Swiss National Championships.

That gave me the opportunity to improve further by playing more difficult pieces, and in 2017, I joined Brass Band Treizes Etoiles and have worked hard to improve with them ever since.

From 2012 to 2019, I was also participated in the National Youth Brass Band which was a great privilege and enabled me to meet fantastic friends and musicians. I have learnt from them all.

When did you start to really take your playing seriously and what is your practice schedule like?

I think that all my results in solo competitions helped me improve as a player – the standard in Switzerland is very high.

Being in brass bands has also pushed me on to play my parts, to keep practicing on my weaknesses and to learn to understand more complex music.

Since becoming principal cornet I’ve also worked on other areas of my playing – from projection to presentation. I’m always willing to learn more. 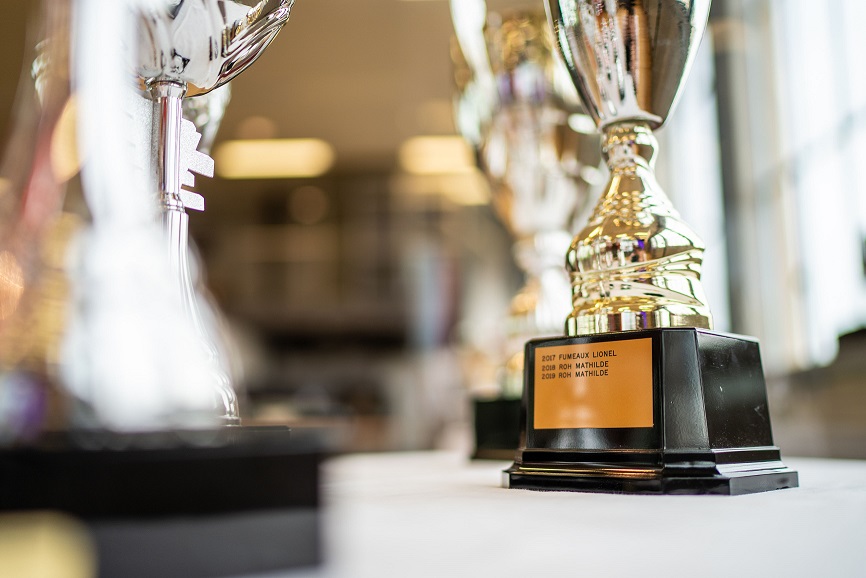 Another entry on the trophy...

Why do you think the Swiss National Solo Championships are so popular – the numbers are incredible.

It is one of few competitions in Switzerland that allows people over 20 years of age to participate as a soloist.

I also think that Swiss players are keen to learn and improve, so do not mind being evaluated against each other.

I also think that Swiss players are keen to learn and improve, so do not mind being evaluated against each other.

We enjoy the success of others – the brass band movement here is small, so it means everyone benefits and inspires each other.

Our bands are not as busy as those in the UK so as players the competitions give us goals that help motivate ourselves, and it is good to hear what famous brass band conductors and performers think of our efforts.

When did you enter your first solo competition – and how did you do?

I did my first competition when I was nine years of age at a music festival for village bands. I finished at the bottom of the ranking, as far as I remember!

I participated in my first final when I was 10 years old. I was terrified and stressed about having all those eyes on me, so I pretended to have a headache so I would not go on.

In the end, I was given support and played – and won. 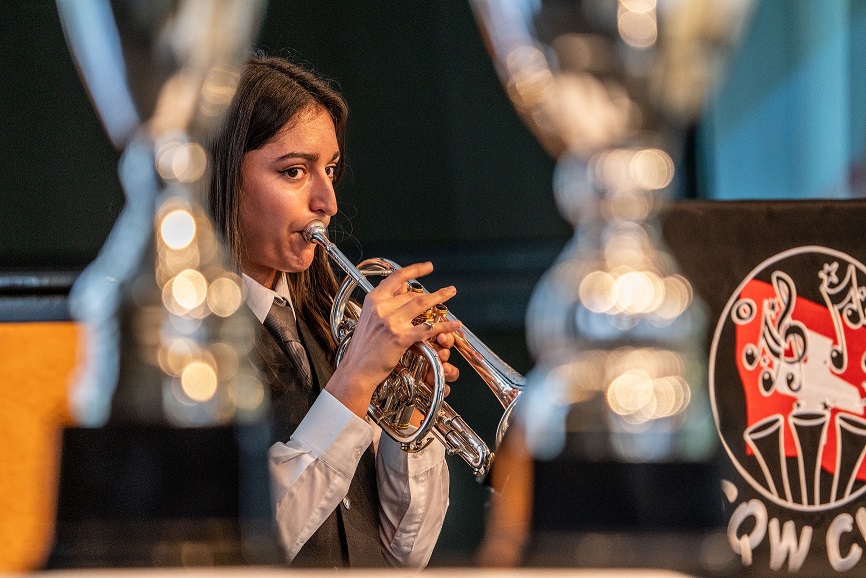 Eyes on the prize...

You have won the National Junior title twice – and now the Senior title three times. How has this helped you as a band player and a soloist?

The experience of playing at the event over the years has helped enormously with my confidence.

By winning these titles it also brings a little bit more pressure on your shoulders for the next edition, but I find this helps with my motivation and training.

I’ve also found that this has in turn helped me as a principal cornet in leading the band, and has made me a much more informed player in terms of style. Not all pieces can be approached in the same way.

This year in winning the Swiss National Solo title you played a brand-new work from Gilles Roche. Can you tell us about it?

I asked Gilles to write a work for me for the 2020 Championship, which was cancelled, so it was still the right piece for me for 2021.

As the name suggests, 'Unconventional', mixes many styles which we are not necessarily used to exploring.

It is very difficult, but Gilles wanted to show my technical as well as lyrical playing.

As the name suggests, 'Unconventional', mixes many styles which we are not necessarily used to exploring.

The slow section really allowed me to express a lot of emotional musicality which is central to me when I choose to play a piece. I really had a lot of pleasure working on it and playing it at the competition.

Will you continue to enter the competition to see if you can win the title again?

I don't think I'll do it again as a soloist at present, as I have other responsibilities with my education to work on - but you never know in the future. 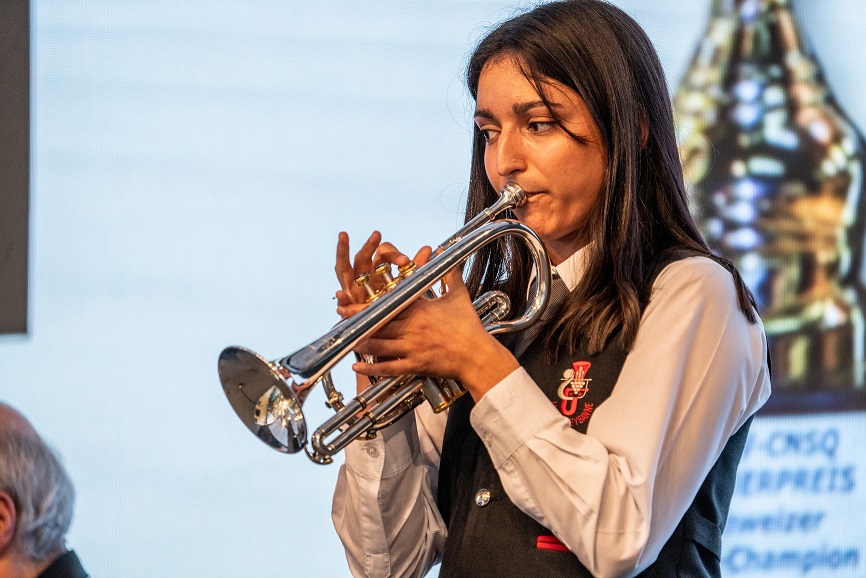 So what does the brass band future hold? You are now principal cornet of Treize Etoiles – do you enjoy the responsibility leading the band?

It is a big responsibility indeed, but I've always wanted to achieve this position so I'm going to make sure I honour it.

Due to Covid-19 I’ve not been able to take to the stage at the National Championships as principal, but hopefully that will now occur and I’m looking forward to it and to working on new solos with the band for future concerts.

What brass band ambitions do you have?

I plan to play with Treizes Etoiles, but if the opportunity arises, I would also be very happy to play in a foreign brass band for a competition or a concert.

I would love to experience that. 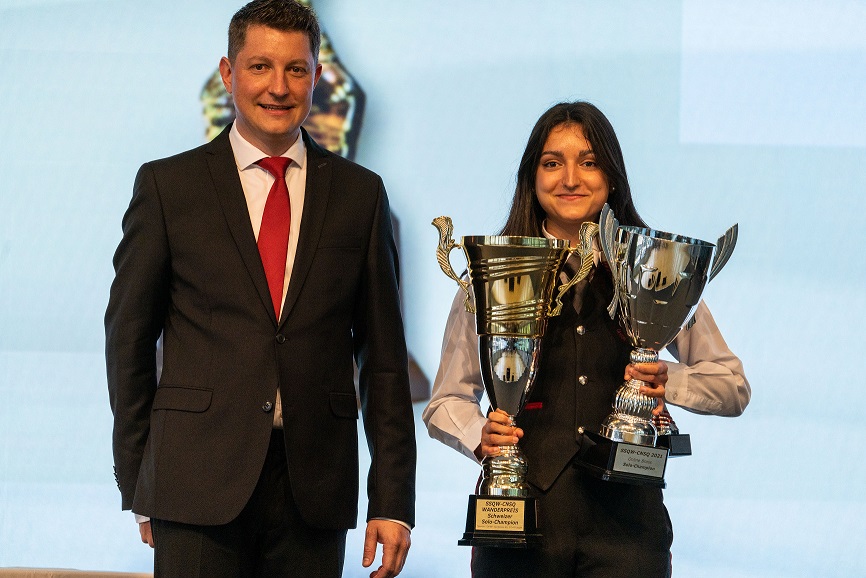 What does the future hold? You are training to become a vet, so will you be able to carry on playing as you do now when you are fully qualified?

I am currently in my third year studying veterinary medicine in Bern.

I think that if I organise myself properly, I can manage to combine music and my job.

As I live in a small apartment I must practice with a mute, which inevitably has an impact, but when my studies are finished, I will of course try to keep my good habits and practice regularly!

I think that if I organise myself properly, I can manage to combine music and my job.

What is the next big musical event for you and the band?

Hopefully, the next important event is the Swiss Open in Lucerne in September.

As all the competitions and concerts of the 2020-2021 season have been cancelled, so we have done very few rehearsals together since September 2020.

Everyone’s fingers are crossed that we will soon be back to playing again in competitions.