150 delegates from around the world made the trip to Wales to enjoy music making with a global outlook at the International Brass Band Summer School. 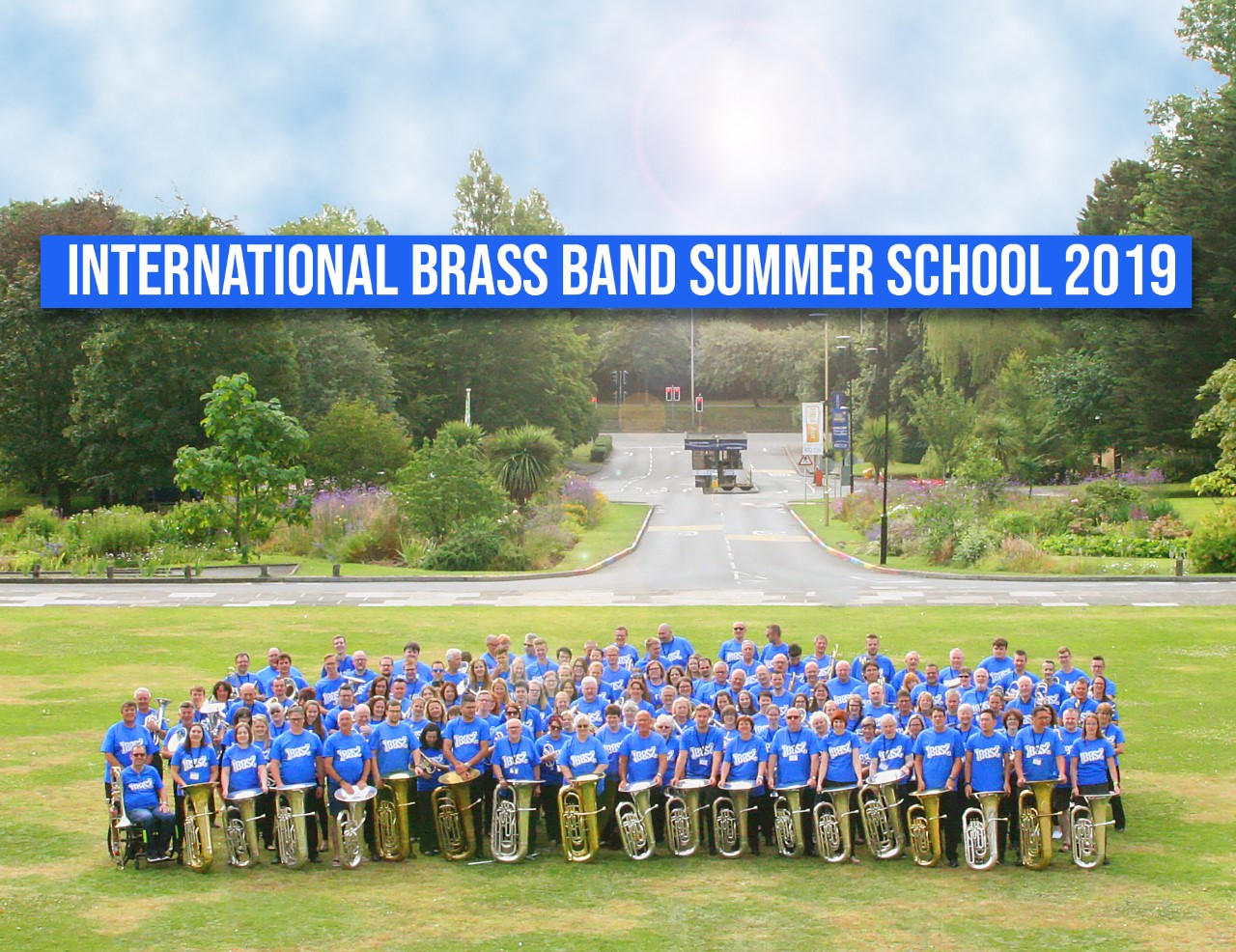 The 2019 course attracted 150 delegates from around the banding world

It’s the organising, not the music making that represents the greatest challenge on a modern day Brass Band Summer School.

And that’s especially true when you’ve managed to attract no less than 150 delegates from 11 different countries to travel to Wales for what is considered to be the foremost course of its kind in the world.

“We always get people ensuring that they’ve booked their place for next year by putting down their deposit even before they’ve put their instruments away!

It’s great to be able to welcome people back though and to brush up on my linguistic skills to ensure that new delegates can find their way to this beautiful part of Wales!”

It’s testament to the success of the course under the baton of Prof Nicholas Childs, that there is a growing number of annual returnees as well debutants each year, drawn not just by the opportunity to be conducted by the Black Dyke Band Director of Music, but to also work alongside a world class team of tutors.

“Alison and my daughter Rebecca have the hard jobs,” he said with a wry smile when we caught up with him on this year’s course.

“The music making with the brilliant delegates is the easy part, but it’s all the hidden extras that they organise that ensure everything runs smoothly.” 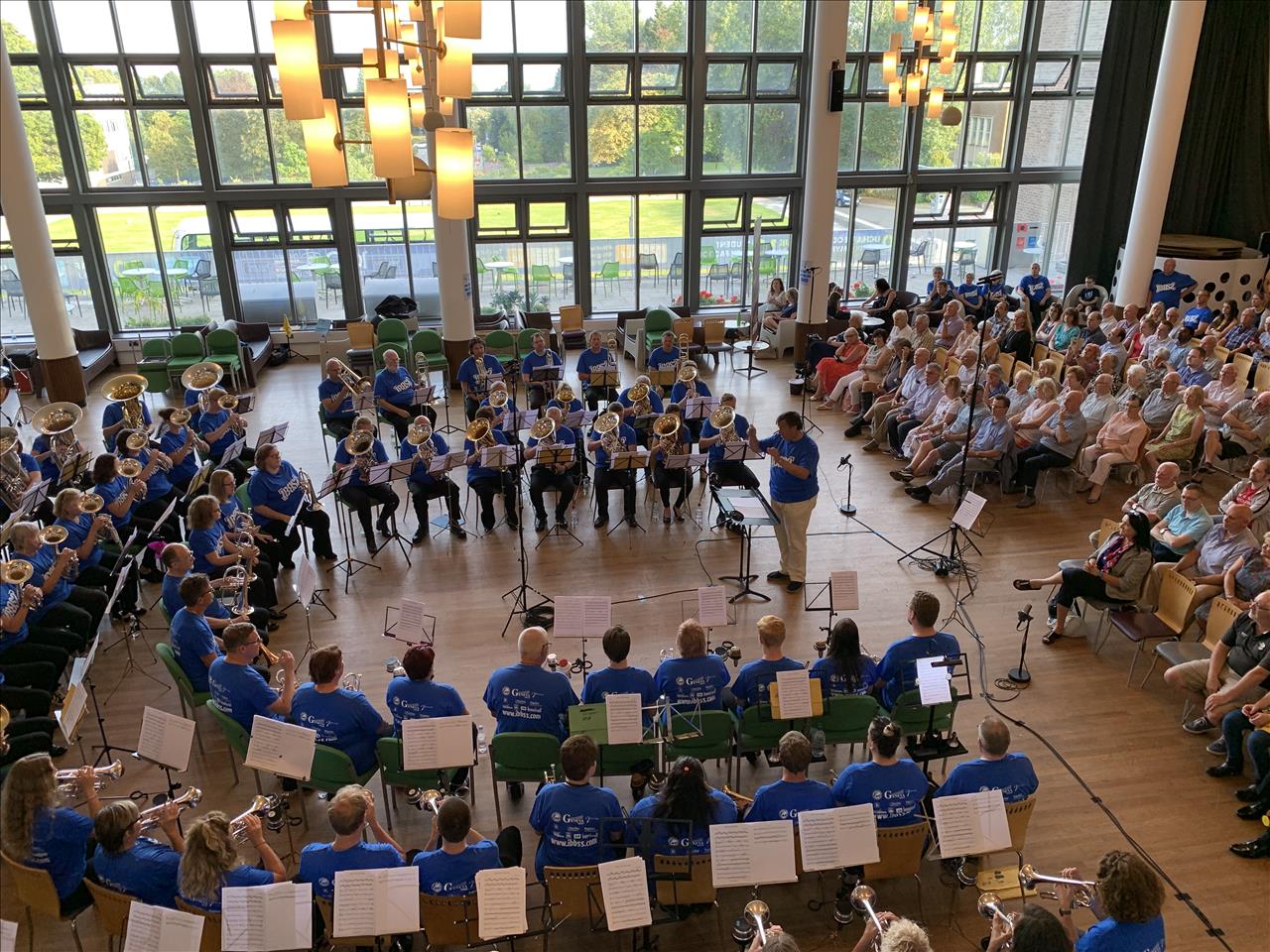 The massed ranks perform in the end of course concert

One such example has been the increased use of social media videos on the likes of Twitter and Instagram, which this year was viewed over 35,000 times around the globe, whilst delegates all leave with a CD of the end of course concert and a library of images to bring back memories.

“That’s something we’ve been keen to develop as it gives the course an extra dimension - making it fun as well as informative,” Rebecca said.

“It’s also a great way for the delegates to link back to their families so they can also get a taste of what is going on.  We’ve had a great response and it’s enabled the course to reach out even further across the banding world.”

More traditional elements though form the bedrock of the week long course – with delegates encouraged to work with a team of tutors, which included Richard Marshall, Tom Hutchinson and Chris Turner looking after the cornets and Owen Farr and Zoe Lovatt-Cooper keeping an eye on the horns and flugels.

It’s that approach to cater for players at different levels of experience that is greatly appreciated – from individual tuition and ensemble teaching to explorations of new skills that are brought together in massed band rehearsals on popular, but challenging repertoire.

Gary Curtin, Dan Thomas and David Thornton were on hand with the euphoniums and baritones, Brett Baker with the trombones and Joseph Cook and Matt Routley, the tubas. The popular trio of Neil Edwards, Matt Whitfield and Simon Oliver made sure the percussion was kept in check.

In addition this year’s ‘Composer in Residence’ was the ever popular Paul Lovatt-Cooper, whilst players who wished to showcase their solo skills were helped by Chris Williams, the renowned accompanist at the Royal Welsh College of Music & Drama in Cardiff.

It’s that approach to cater for players at different levels of experience that is greatly appreciated – from individual tuition and ensemble teaching to explorations of new skills that are brought together in massed band rehearsals on popular, but challenging repertoire. 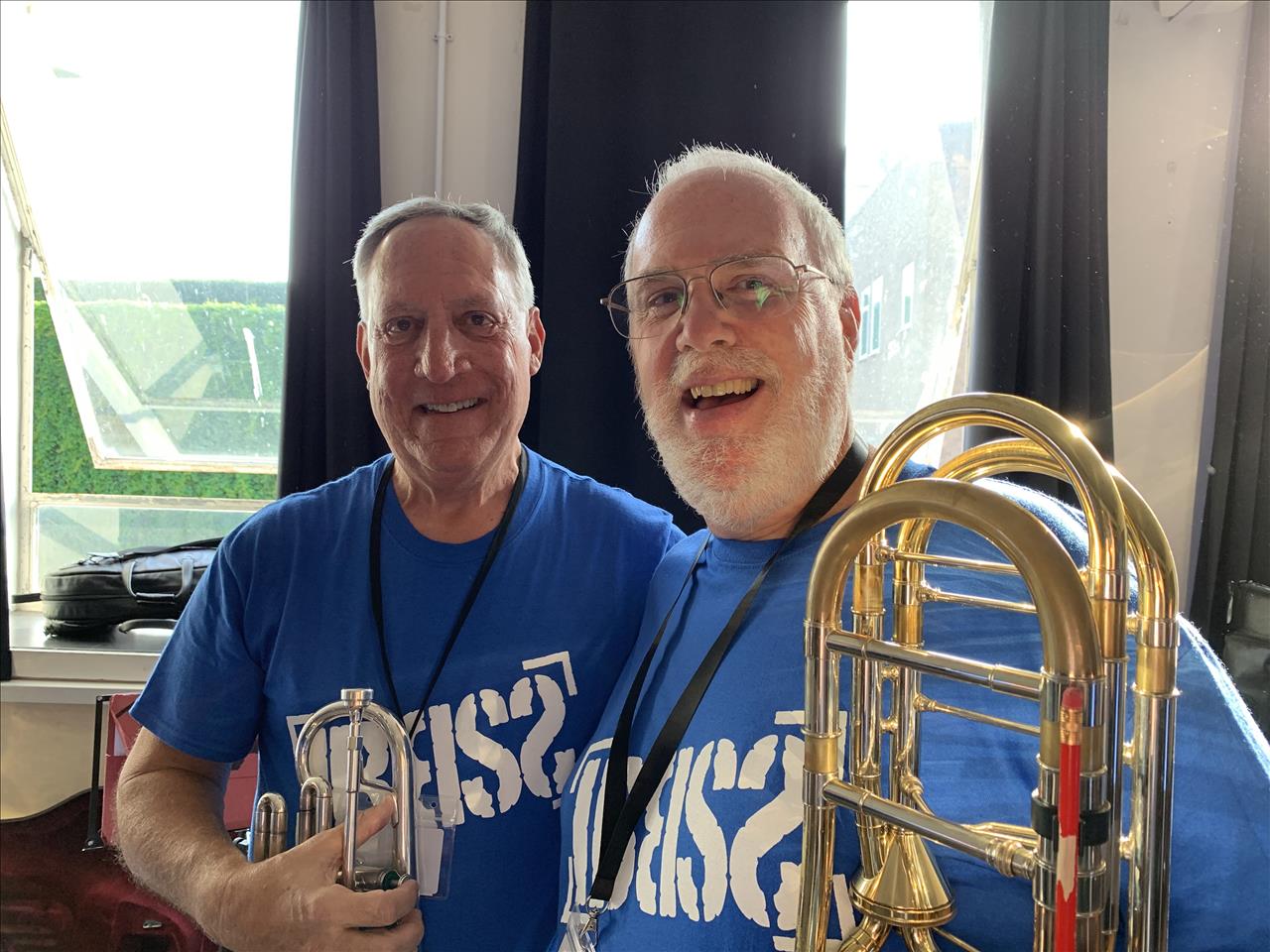 That was certainly the case with American visitors Neil Craver and Greg Weber aged 65 and 69 respectively, from Florida. They live in a ‘retirement village’ – although with a population of around 130,000 people and with amenities to cater for all needs, it sounded anything but.

Greg said; “We play in our own Celebration Brass Band which was started in 2010, but we’ve always wanted to come to the UK and to this course in particular.

It has everything we want - from the music and the tuition to the friendships and the chance to enjoy the local scenery. We’ve enjoyed every minute of it and we’ll be taking back new ideas to our band for sure.”

It has everything we want - from the music and the tuition to the friendships and the chance to enjoy the local scenery. We’ve enjoyed every minute of it and we’ll be taking back new ideas to our band for sure

At the other end of the scale was 15 year old cornet player Frederik Engelsen from near Bergen in Norway, who came with his mother to enjoy his first taste of the IBBSS.

Already a prize winner in an international trumpet competition he had recently come back from playing in the Ukraine and has already been invited to play with the Norwegian champion, Eikanger Bjorsvik Musikklag.

“I wanted to have the chance to link up with Richard Marshall, Tom Hutchinson and Chris Turner, as I knew I could learn so much from them,” he said. “Coming here has been incredible – a real eye opener for me.  I’ve learnt so much in such a short space of time.” 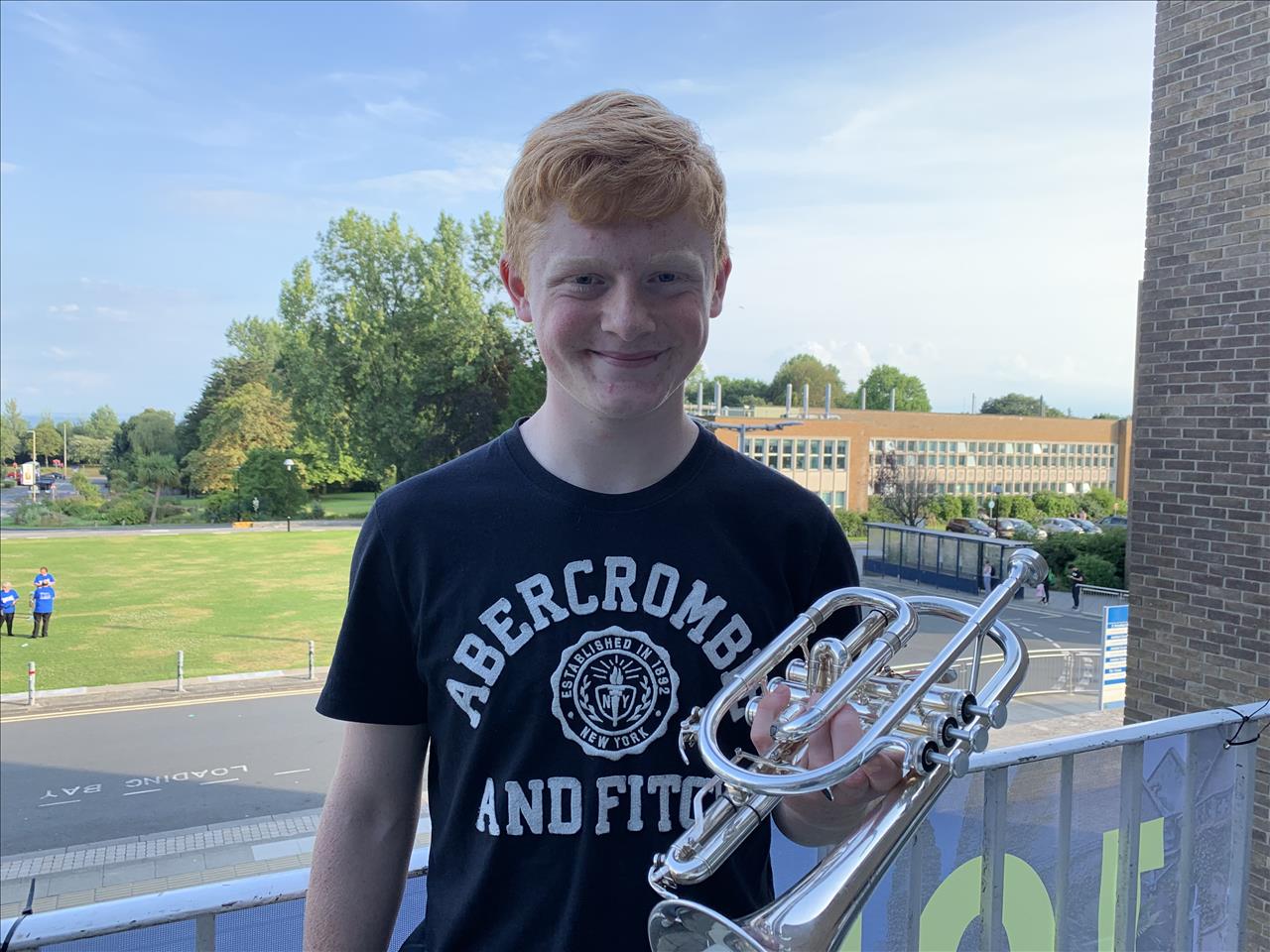 “I think that’s a key ingredient for the continued success of the IBBSS,” Prof Childs says. “Delegates can choose what they want to do and at their own pace – either individually or as a small group or just by being part of the massed bands.

It’s about exploring new skills as well as improving existing ones, but all underpinned by the enjoyment of the music making and an inclusive, supportive environment.”

One such delegate was Andy Allcock, who said: “The course is fabulous opportunity to meet new friends and making music under Prof Childs was a fantastic experience.

It’s that team spirit and friendliness, even if you have never played in a band before that makes everyone feel welcome, supported by each other and the staff led by Alison and Rebecca”.

It’s about exploring new skills as well as improving existing ones, but all underpinned by the enjoyment of the music making and an inclusive, supportive environment

The fun element is never far away either - be it the traditional trip to Verdi’s ice cream parlour on the beautiful Mumbles coast, to the competitive atmosphere of the ‘Quiz Night’ where the musical entertainment was provided by delegates themselves.

“There was a lot of pride at stake there!” Rebecca says, “and that was also the case with our Delegate Ensemble Concert, which this year saw the launch of the all female group, ‘Girls Alone’ and especially with our very first IBBSS ‘Brass in Contest’ competition. 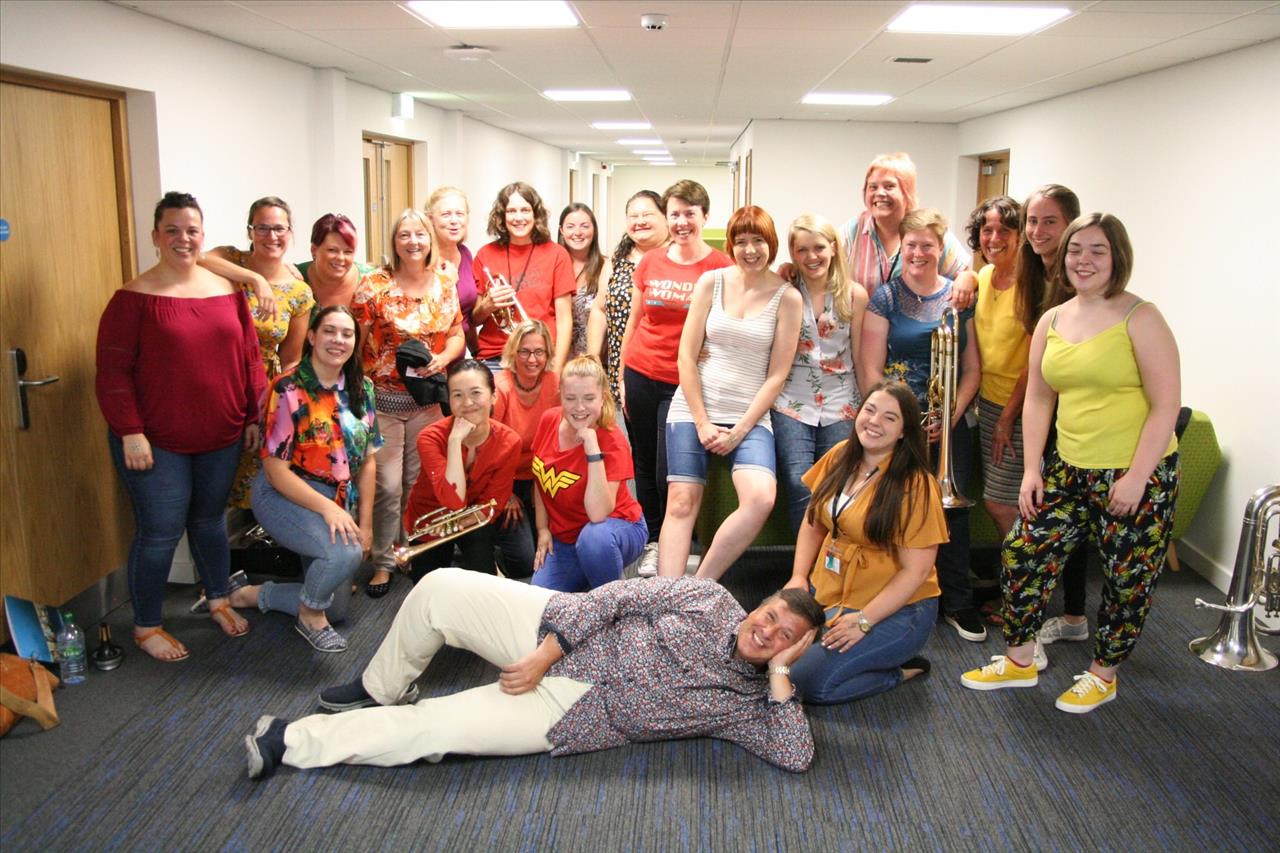 The standard of playing from the trio of ensembles was remarkable, especially as they were also tested with a march, a Philip Wilby hymn setting and a set-test piece - which just happened to be the famous ‘Jousts’ movement from ‘Pageantry’.”

Rebecca added: “All this and it’s always good to celebrate both Yorkshire Day and Swiss National Day in Swansea - and thanks to the valuable support of sponsors such as Geneva Instruments and Band Supplies, delegates had the opportunity to test out the latest instruments and stock up on essential goodies.” 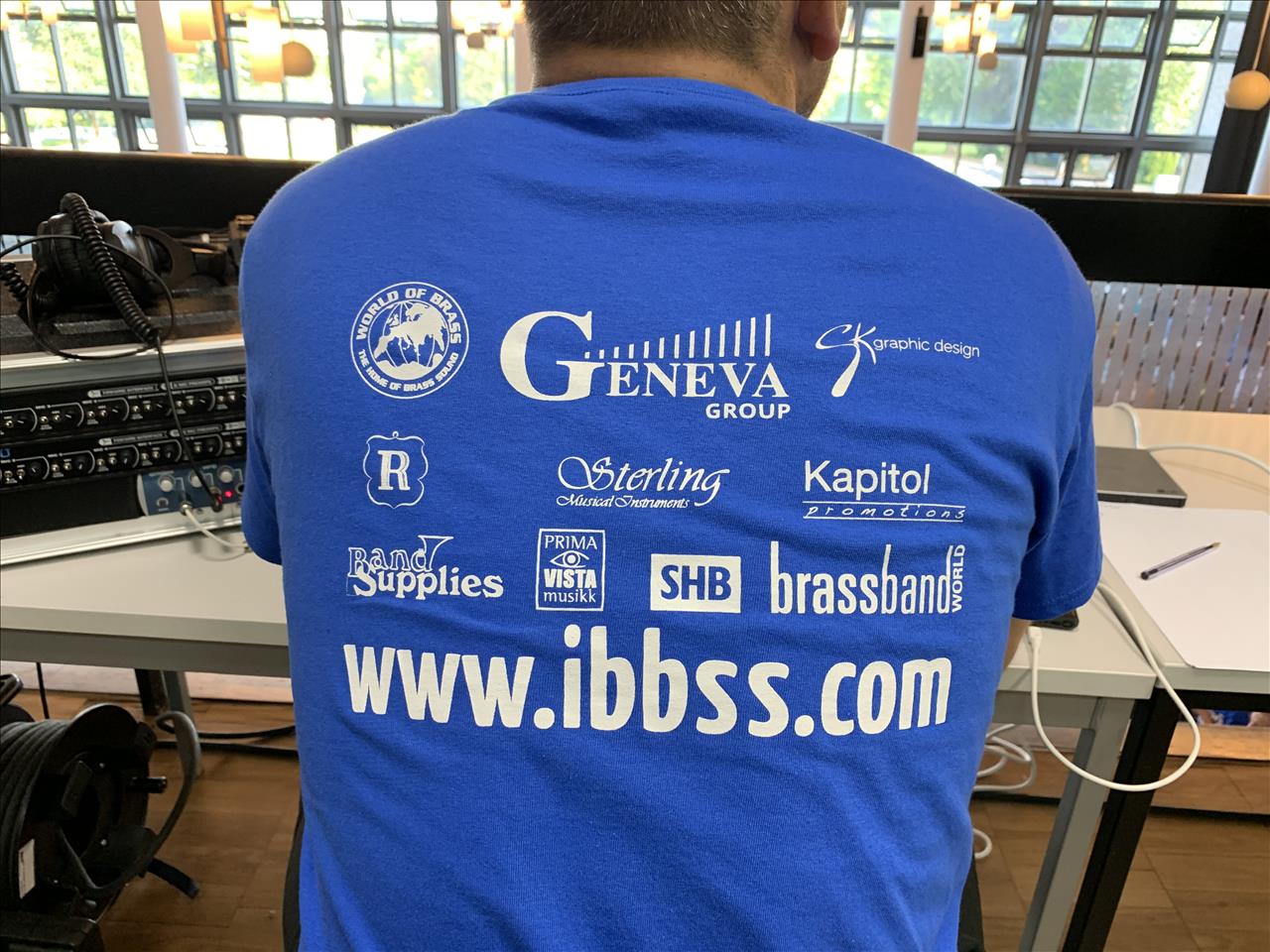 There is also a growing link to the local community – one which sees the end of course concert well attended by many Welsh band enthusiasts and a number of students from other summer courses that take place at the campus at the same time.

And this year some of the most enthusiastic new fans were a team of campus security guards who stopped off on their rounds each day and at the concerts to listen to the music making.

“We’ve been keen to link up with the local community and it’s great that they come along to support us,” Prof Childs added.

“All that and the sun always shines!”

Little wonder then that the list of delegates already booked in for 2020 is a long one.