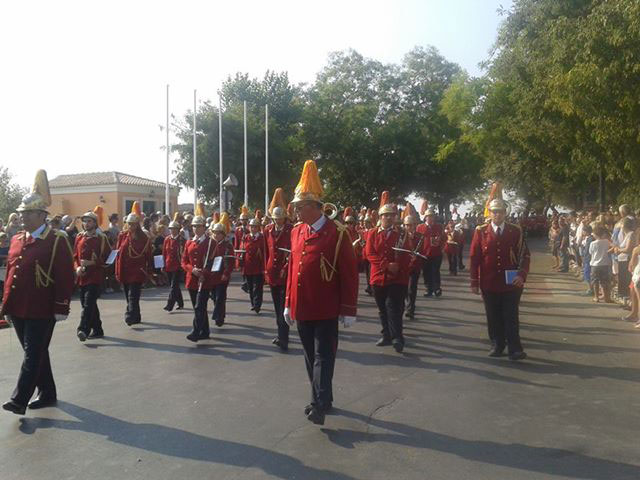 Sitting on a sun kissed beach in Sidari, on the northern part of the Ionian island of Corfu, I contemplated how I felt about brass banding; a hobby, a way of life and something that has in many ways defined special moments in my life.

Somewhere in the last four years I had lost the feeling of belonging, the family coherence and the drive and meaning that it provided for me.

Nearly two years ago I decided that I no longer enjoyed my banding experience. I had played 15 years with Brighouse & Rastrick, with the quality musicians, conductors and events, yet this was surely not all that there was to playing – and enjoying music making.

I thought I would miss it: The structure to my life and the meaning when I put on the purple and gold.

The sad answer is that I did not.

In June this year, free of any summer commitment, I contacted a friend of mine called Babis Makris, who is a leading conductor in Corfu, and said I was thinking of playing again.

He replied by saying that music was a way of making your life breathe, like feeling sunshine on your soul and something exciting that you can always look forward to. They were the very things I had lost somewhere in the banding fog.

Babis immediately invited me to play both with his band from the village of Acharavi, and with the oldest Philharmonic Wind Band based in Corfu Town (started in 1840).

I booked my tickets the next day. It was a decision I will never forget for the rest of my life.

Knowing that I was going to be playing again was exciting enough, but to experience playing in another tradition in another culture was an amazing prospect.

I started practicing a month before leaving, playing with the likes of Lindley, Marsden, Meltham and even a bandstand job with Aberystwyth Town. Each of them made me feel welcome and put up with my mispitching and lack of stamina.

However, this was nothing compared to the experience and motivation that I received in Corfu, an island with just over 110,000 inhabitants that has no less than 18 Philharmonic Wind Bands, each with between 40 and 80 members.

These philharmonic societies are also educational institutes, providing youngsters with free music tuition and instruments and the opportunity to play in highly significant cultural events enjoyed by hundreds, if not thousands of local people.

Most players are taught through learning repertoire in band settings rather than individual lessons – a mix of Corfu folk tunes, Italian opera highlights, some original wind band pieces and many marches - including ‘Colonel Bogey’!

There are also many non-musical characteristics that are shared between the bands in Corfu and in the UK. 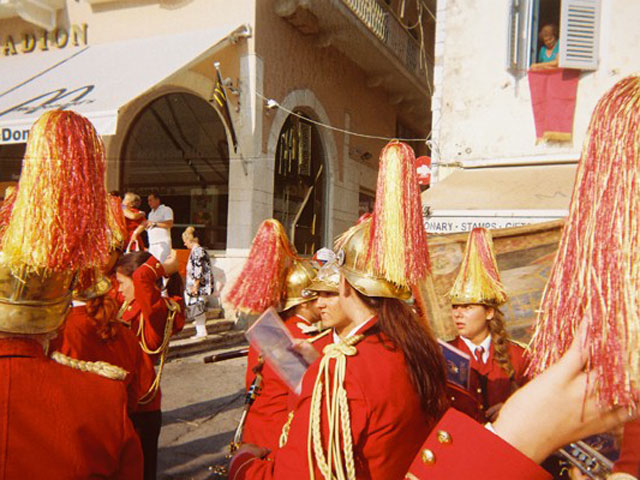 Getting ready for the off...

They play in military style uniforms, rehearse in their own bandrooms and have musically qualified conductors (most of whom are former players). Older players are seen as additional teachers and influences and the rehearsal schedule and its delivery share many similarities.

In the week preceding the formal events I attended three rehearsals; two on the marches for the Christian procession and one for the bandstand concert, both celebrating St Spyridon.

On the Sunday morning I woke at 6.00am, dressed in the uniform which they provided and waited for my lift to the bandroom.

Does this sound familiar?

We were told there was a problem with the bus, so instead we packed 20 or more players into a 15 seat mini bus with no mention of health and safety! There was no complaining, though I now know a few Greek swearwords!

There was a mixture of excitement and nerves from everyone as we drove along the roads at break neck speed. Older members, veterans’ of many processions shared jokes whilst younger members looked on quietly.

Little did I realise why until we marched up to the main square playing a traditional Corfu march to be met by the sight of over 7000 people, national television and radio, priests, tourists, locals, bus loads of children and four other bands!

Each band had its own set of colours. Babis explained that they had summer and winter uniforms in different colours – as did the other bands.

He also explained that this was the smallest event of the year, with the Easter parade having twice the number of bands and an even bigger audience.

I will never complain about marching at Whit Friday again!

The event started in 25C temperature and finished two and half hours later in 40C heat, after marching in tunics and metal helmets.

It was draining - but the rush was amazing. 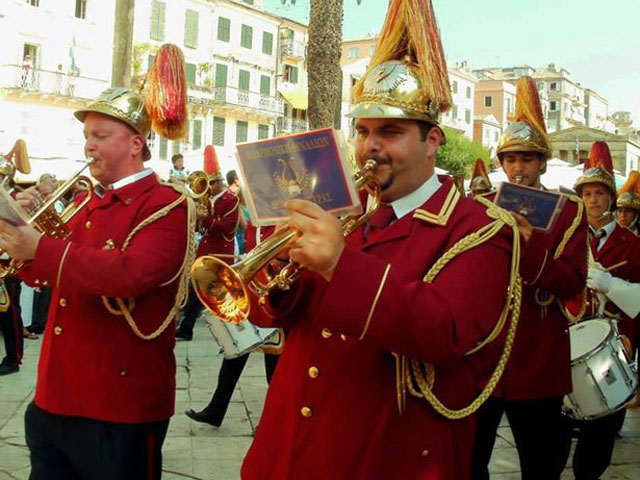 The banders were treated like celebrities, warmly acknowledged with nods from locals and supplied with free water and food. The players had to go to the church, albeit briefly and pay their respects to St. Spyridon, whilst the public paid their respects in the adjoining park.

It was a very meaningful occasion, and a long way away from the modern day Whit Friday experience and the lack of religious meaning demonstrated there. This was inspiring. I did not even understand the language, yet I was overwhelmed.

The concert in the night, on a British designed bandstand overlooking the old fort and Corfu harbour, playing with outstanding musicians, young and old, was a great privilege.

Next to me was a trumpet player called Chris Paip had earlier been treated by local Corfiot people as a legend, whilst a trombone player called Tzimis Grammenos, could play in any brass band in Europe.

Even though it was pitch dark there were hundreds of people listening, including a British brass player who told me later on Facebook that he was there.

It rounded off a visit to a banding tradition where the focus is on community music making primarily for the people of that culture to celebrate.

Contests have been abandoned years ago as it promoted divisive attitudes, poaching of players and lack of sustainability by inhibiting the development of their own talent.

Instead of the contests they now have an infrastructure between 18 bands that promotes co-operation, conservation and developing the banding tradition as a whole.

It left me with the overwhelming feeling that brass bands in the UK may have every right to say how good they are, but there are musical traditions in Corfu which could improve how we enjoy our banding immensely if we embraced them fully.