A massive field of 25 bands — but each of them knows they have a proud record to maintain if they get the nod for Cheltenham. 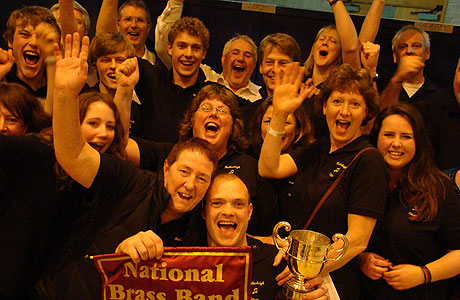 There is a fantastic field of 25 bands taking part in the Fourth Section on Saturday morning, ensuring that one of the strongest regions in the country will be able to send four bands to Cheltenham.

The attraction of a deceptively simple test piece in the bucolic splendour of the Vaughan Williams ‘English Folk Sing Suite’ will give adjudicators Alan Morrison and Tony Swainson (below right) plenty to ponder in the box, although the lively acoustic is well known to nearly all the competitors here, so hopefully none will try and blast their way to victory.

Any that try do will surely come a cropper.

Those who do get the nod have a proud record to maintain at Cheltenham – with last year’s qualifiers providing a top six finisher for the eighth time in a row.

The region has only failed to do that once since 1998, and has twice provided a podium finisher in the last three years and a winner in 2009.

That is quite some achievement.

Plenty to play for

Plenty to play for then with no less than five returnees, headed appropriately enough by Cheltenham Silver conducted by Angie Shepherd.

They last competed in 2010 but came 5th at the Gloucester Entertainment contest.

Lydney Town returns for the first time since 2007, under the baton of Kevin Ford, whilst South Molton and Spinnaker Brass had a year out last year, so will want to make a mark on their return we are sure.

It’s great to see Thornbury Town return – a name that has adorned the First Section title board in the past.

This is their first appearance since 2003, conducted by the talented Darren Williams.

Andover is back for a second time after making a fine debut last year in 7th, and coming 9th at the Wessex contest, whilst Bideford Town is another second year returnee after coming 13th last time out.

Bratton will be looking to make it two finals appearances in a row after coming 3rd last year and putting up a solid showing in claiming 14th place at Cheltenham, whilst Chalford Academy is certainly moving in the right direction after jumping 10 places up the results table to 9th last year.

Gosport is back for a second crack looking to build on an encouraging result at the Gloucester Entertainment contest where they came 6th, whilst Dave Dobson will be looking to push Launceston into the top ten for a third year in a row or even better after winning at Torquay late last year.

Marshfield will be looking to bounce back after dropping a few places to 17th last time out, whilst Joanne Sykes will be looking to build on an impressive runner up placing at the Torquay contest as Midsomer Norton makes its second successive appearance.

New Forest will possibly start as the bookies favourites after they delivered a cracking performance at the National Finals to end runner up under the baton of Ian Luxford, whilst Okehampton Excelsior will be looking to push into the top ten after an encouraging performance the Torquay contest where they ended 5th.

Porthleven just fell away last year to end 22nd so will look to bounce back, whilst Shanklin Town makes the short trip over from the Isle of Wight looking to improve on last year’s 16th place.

Swindon Brass is a band heading in the right direction under the baton of Francis Cowley after coming 5th last year, so will be hoping to gain a qualification place at least, whilst the same applies to Tiverton Town who came 6th and claimed a podium finish at the Torquay contest.

Torbay will be looking for a move up the results table after coming 21st, boosted by a solid showing at the Torquay contest where they came 6th, whilst the consistent Totnes should be confident of claiming yet another top ten finish or even better.

Verwood Concert Brass B, makes their third consecutive appearance under the baton James Haigh, whilst Weymouth Concert Brass will be looking to start making a move back towards the Third Section following their relegation.

That just leaves the improving Wilton & District who jumped up the results table to come 8th last year and Wincanton Silver who will be looking to build on their solid showing at the Torquay contest where they came 4th.

An almost impossible ask. Such a large field of bands and nearly all of them bringing some sort of form to the stage too.

If we do have to look at the form book then New Forest should be the band to beat, with Bratton not too far behind. The remaining qualification places will be a real dog fight but we opt for Weymouth Concert Brass and Swindon Town.

They will be pushed though by the likes of Tiverton and Andover with our dark horse of Wilton & District.

If we get this top six right, we will buyt drinks for everyone at the Riviera Centre...