The banding world paid tribute to one of its greatest men of brass, as the funeral of Doctor Roy Newsome took place in his home town of Bury. 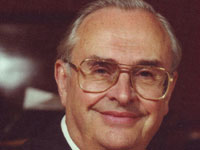 They came from all corners of the banding globe to pay their respects.

Amid the vaulted columns of Bury Parish Church, they sat in neat lines of personal tribute to Dr Roy Newsome: Family, friends and colleagues joined by players, conductors and everyday bandsmen and women from all levels of the brass band movement.

The murmur of pianissimo conversations and semaphored waves of greetings as people found room to squeeze into the long church pews was muffled by the sound of the Black Dyke Band, as they performed Roy’s personal selection of music for the occasion.

Meticulous to the very end, he had planned the service in its entirety – from the selection of hymns which inspired him as a member of the Church Lad’s Brigade and the Bible reading from John - Chapter 14, to the emotional performance of ‘My Love is Like Red, Red, Rose', in tribute to his ‘magical maiden’ Muriel.

He even made sure he gave a final nod of appreciation to one of his banding heroes too, with his own final entrance to the church accompanied by family and friends, backed by a rousing performance of William Rimmer’s march, ‘Punchinello’.

Old rivalries were put aside – as only a man who gained such widespread respect could manage.

Black Dyke – ‘the best band I ever conducted’, had their ranks supplemented by former players who had enjoyed so much success under his baton in Queensbury and beyond, such as Derek Jackson and David Pogson.

Grimethorpe’s James Fountain, a talent who flourished through his association with Roy’s beloved National Youth Band of Great Britain, filled the principal cornet chair, whilst Philip McCann, who he persuaded to join Black Dyke in 1973, rolled back the years with his sublime cornet solo.

Professor David King, the man who has perhaps found greatest inspiration through three decades of personal and professional association with Roy Newsome, gave an emotive eulogy. A life lived to the full was its theme – and there was no one who could disagree.

It ended with Roy’s inspired choice of the final section of ‘Journey into Freedom’ – a fitting reminder of his intertwined Christian beliefs and his ability as the Rev Dr John Findon spoke of in his warmly observed, prescient address, to understand the greater context of all things musical – even when conducting.

Roy’s son Neil spoke on behalf of the family, delivering a touching homily to a father, grandfather and a recently proud great grandfather, whilst Jean Brownbill delivered the reading – a further reminder of Roy’s enduring belief in things greater than the mere here and now.

The hymns were sung with gusto, accompanied by both the band and Professor Philip Wilby playing the magnificent sounding church organ, before the final coda of a remarkable musical life ended with Roy Newsome’s final journey from the church accompanied by the sound of his own arrangement of ‘Deep Harmony’.

As befitted a remarkably modest, humble man, there were no displays of his own achievements to accompany him to his final resting place – just a lovely spray of white lilies placed lovingly on his coffin.

Of course, there wouldn’t have been room even in the vast expanse of the church to hold all of them anyway – the trophies and championships, the books and records, the mementoes and presentations from all corners of the banding world.

Instead, tales and stories, personal tributes and memories remembered a great man of music from those who packed into the church hall following the service.

The Rev Dr John Findon spoke of Roy’s love of people – and here was an occasion he would have surely loved the most.

As one former colleague later said – he would have been sat in the middle of it all, Muriel at his side, holding court as only he could: Laughing and reminiscing – engaging with the very people he knew shared his love for music – and brass band music most of all.

A great man of brass was laid to rest yesterday - but he will never be forgotten.