Cory's principal cornet player tells 4BR just who he would invite around to his gaff for a meal and a chin wag... 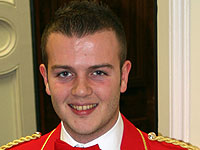 This month we have asked Tom Hutchinson (right), principal cornet of Cory.

Tom is one of the new breed of talented young players who now occupy the principal cornet seats of the very best bands in the UK.

A product of Yorkshire banding, he has played with Barnsley Building Society, Rothwell Temperance and Black Dyke, before making the move to Wales in 2010 to take over the hottest seat in Welsh banding – principal cornet of Cory.

A former principal cornet of the National Youth Band and a graduate of the Royal Northern College of Music, he has settled into Welsh banding life, although he admits to not quite getting the hang of the accent quite yet… 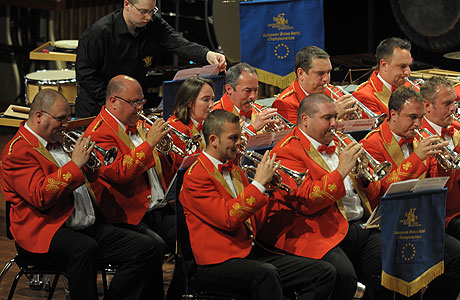 In action: Tom leads Cory at the European Championships in Montreux

Picking up the bill

He told 4BR that his choices were deliberately made to ensure that people knew he had a life away from banding… “I could have picked so many friends that I know in banding that it was impossible, so I was grateful that 4BR allowed me to pick anyone who I thought may enjoy a natter about all the topics and interests I have – from comedy to cooking, football to films.

”I don’t know who would pick up the bill for the night, but I think it would be worth every penny!”

One of the funniest guys on TV at the moment. He brings me to tears every Thursday night on Celebrity Juice.

Got to be one of my favourite footballers.

Plays with his heart on his sleeve but more importantly, he’s an absolute nutter! Listening to the radio when he’s on is quality entertainment and definitely worth a listen.

This guy has to be my favourite musician of all time.

The way he sings and plays with such softness and purity is something else. His fluffy sound on the trumpet was due to a gap between his two front teeth, creating such a distinct sound, but I could never figure out how his style of trumpet playing is almost identical to the way he sings - its incredible.

I would have to shake his hand and congratulate him in bringing one of the funniest moments ever to a football pitch.

Watching the Sheffield Wednesday legend ‘deck the ref’ will go down in history, but I was fortunate enough to see it live.

Needless to say Wednesday went on to lose!

These guys will always provide great entertainment wherever they go - sober or not!

My dinner guest list wouldn’t be complete without these two, and they provided many memorable moments during my time at Black Dyke.

I toured Australia with Mr Morrison and not only is he one of the nicest blokes in the world, his playing just leaves me speechless.

All I want to know is how he does it!

This man is responsible for many lost hours through university!

He wrote Family Guy and American Dad, two hilarious comedies, but some would say the humour is of an acquired taste (according to my parents anyway)!

Probably one of the greatest actors ever, and starred in two of my favourite films Godfather and Scarface.

I just want to know what it’s like to be a mobster!

I’m going to get some stick for choosing mostly male guests, so I’d thought I’d shift the balance and invite this bang tidy lass!

I guess we need someone to cook it all, and who else but the loud mouthed chef!

He makes great TV and I’m sure he’d be a great laugh round the dinner table.

I’d also like to tell him that £15 for a cooked breakfast in his ‘plane food’ restaurant in Heathrow is ludicrous!