4BR looks forward to the Masters and what is in store for the competing bands at Kettering. 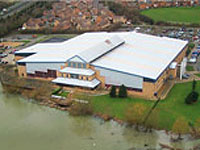 The halfway point of the contest season and already some pretty tired bands will be looking forward to a well-earned break.

They will deserve it after this weekend.

12 of the 17 contenders that step onto the stage at the Lighthouse Theatre on Sunday will have just recovered from the contesting rigours Spring Festival in Blackpool.

Five bands had to wrestle with Hermann Pallhuber’s fearsome ‘Titan’s Progress’ in the Grand Shield, six had a struggle with ‘Prisms’ in the Senior Cup, and one had to overcome a neutered version of ‘Benvenuto Cellini’ in the Senior Trophy.

Getting the enthusiasm levels up for yet another major event after those particular challenges is one heck of an ask, (only two left with a promotion place to their name) especially when faced with a test piece that hasn’t exactly tickled the rehearsal taste buds.

It’s not clear from Darrol Barry’s (below right) programme notes to his symphonic study ‘Gemini’, whether the astrological star sign, the early 1960’s American space programme or a phonetic take on the 2003 British Eurovision Song Contest entry inspired him.

One thing is for certain: It has certainly created a bit of a stir.

The structure of ‘Gemini’ with its repeated sections, elongated reprises and acrobatic solo interludes has caused more than a few eyebrows to be raised.

That’s small fry however compared to the look of wide eyed bewilderment induced by the instruction sent to bands stating that the demanding, but not overtly terrifying cornet solo in homage to Maurice Murphy could be played on soprano if desired.

If these are truly ‘Masters’ quality bands then such an opt-out beggars belief.

Asking the ‘bumper up’ to give a helping hand is one thing – getting a totally different instrument to play it, something else.

Not even Liberal Democrat MP Chris Hulme could get away with transferring that possible points deducting liability.

Hopefully the judges will take a very dim view of any that do.

This is a major Championship level contest.

That apart, ‘Gemini’ does present real technical and musical difficulties: From the opening balance of the two baritones and timpani, through the playfully extrovert ensemble work that follows, to the difficult lyrical solo interludes for euphonium, flugel and latterly cornet and horn.

Motifs and fanfares abound, as do the reprises and repeats of thematic material – some more successful and easily understandable than others: The ‘tick tock’ ending is a strange one.

The work is dedicated to Dr Roy Newsome – a man who the composer states, he owes so much: However, dedication and inspiration are two very different things all together.

Holst’s ‘Planets’ perhaps – but then again Gemini’s are ruled by Mercury and despite the temptation, this is more Jupiter and Venus country.

So what about the duality of the Gemini astrological spirit? Come off it – that’s tosh.

Eurovision?  Now you are having a laugh.

Ciphers and ghosted ideas abound, but it is only with the sad threnody lament in memory of Maurice Murphy that the composer clearly delineates the musical core of the work.

Even this however, still sits uneasily amid its surroundings.

’Gemini’ is exciting and purposeful, pulsating and driven - but strangely oblique in development and condensed in range.

It states its case firmly and deliberately – but leaves more intriguing questions than clearly defined answers.

That said – it’s still a highly demanding test though.

Despite the musical reservations, the ‘Masters’ remains a very popular event, thanks in no small part to the generous prize money on offer to the bands that claim the top six places and the excellent organisational skills of Messer’s Biggs and Franklin.

Tickets for a long day of music making are a touch on the sharp side at £17.00 for the contest and a further £15.00 for the Gala Concert.

Theyy are cheaper than Fairport Convention on Wednesday night and only a quid more expensive than the final of ‘Britain Does Variety’ here in a couple of weeks time.

That said, it’s still a fiver more than 'Peppa Pig’s Party' next month.

4BR will of course be there providing you with our live comments and Twitter feed, pics and post contest retrospectives.

And after all that – even we will be in need of a whiff.