UKBBA — The time to have your say

The proposals for an United Kingdom Brass Band Alliance have taken another step forward. Now they need to know what you think... 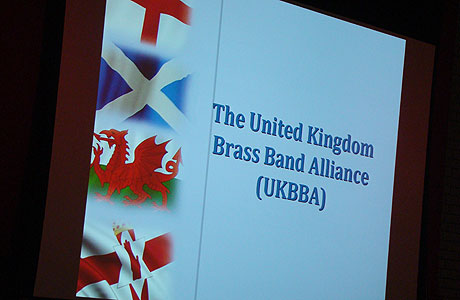 The proposals for the creation of the United Kingdom Brass Band Alliance have taken another significant step forward.

Now the working party that is overseeing its development is wanting to know what you think.

These are the latest proposals, aims and objectives that have been issued by the Working Party.

All comments should be sent to: enquiries@ukbba.org

Concerns about the future of Banding in the UK:

There has been a steady decline in the number of UK bands over many years.

A 'Brass Band Summit' attended by representatives of banding organisations was convened in July 2010 to consider if the formation of a UK-wide body could reverse that decline and a Working Group was formed to examine the need and possible structure of a UK-wide body.

The Working Group reported to a reconvened Summit in January 2011 that there was a case for such a body.

It was agreed by those present that the proposals presented in this document should be given the widest possible publicity so that everyone in the brass band world would have an opportunity to comment on them.

We recommend the creation of the “United Kingdom Brass Band Alliance”, a cooperative, all embracing but non-hierarchical organisation that will be in a better position to support brass banding at all levels.

The national bodies of England, Scotland & Northern Ireland are fully committed to the proposals and to any changes in their own set up that would enable UKBBA to be established and function efficiently. Wales is currently in the process of establishing a national body that could take its place in UKBBA.

Structure of the New Body: 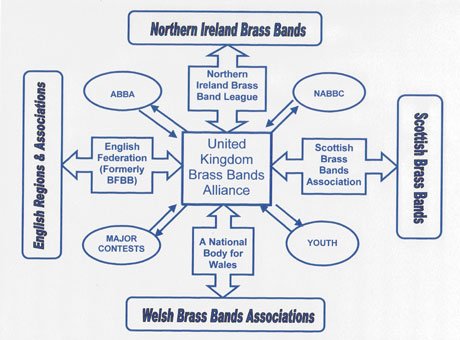 The purpose of UKBBA would be to secure a dynamic future for brass bands and brass band music in the United Kingdom.

The UKBBA would be an enabling body not a management body.

It would not be concerned with organising contest nor would it create another level of management.

1. To enable co-operation between England, Northern Ireland, Scotland and Wales on matters relating to brass bands.

2. To promote and support the brass band as an integral and traditional musical art form in the UK.

3. To stimulate and encourage young people to take up playing a brass instrument as a life long hobby and to encourage those players who have left to return to banding.

4. To foster the concept of personal enjoyment and benefit to the community of playing in a brass band.

5. To encourage brass bands, players, conductors, adjudicators, contest promoters and governing bodies (all participants) to look forward, to adapt to change and strive for continuous improvement.

1. To add value to the activities and initiatives of the members of the Alliance through working together.

3. To capitalise on the investment that is being put into music teaching in schools and elsewhere in the educational system.

4. To restore brass banding to its traditional position as a widely accepted part of mainstream music making in the UK.

The running costs of UKBBA would be funded by the 4 national bodies on a pro rata basis to the number of their member bands.

Each national body would decide independently how to collect its own membership fees.

To achieve UKBBAs aims and objectives, it is essential that its constituent national bodies are able to demonstrate that they represent all of brass banding.

The resurgence of brass banding will only come about if all the bands are members of their own national bodies.

Your views and comments:

At this stage, these are just proposals. We are inviting constructive comments from everyone in banding.

This is YOUR opportunity to positively influence the future of brass banding. Please do not miss out on this.

An open meeting will be held on 2nd July to which all interested in banding are invited to attend.

A presentation and discussions of the proposals, amended as appropriate, will be made taking into account the feedback received.

Approval will be sought for the formal establishment of UKBBA at this meeting.

The GUS Band - From Rothwell with Love