Can Flowers overcome the never ending curse of the defending champion? It would stop us having to write the same introduction each year... 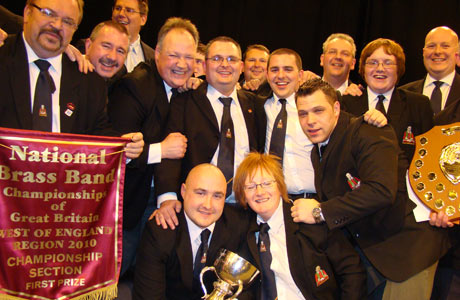 There is one thing about the Championship Section contest here:

You wouldn’t want to bet your life savings on a defending champion retaining their title however attractive the odds at the Torquay branch of William Hill.

And this year is no exception – for all the right reasons.

However, Derek Broadbent and Kevin Wadsworth (right) are the two men not easily impressed in the box, so whoever wins will have to do it with plenty of inspiration to go with the perspiration.

Flowers return to the Riviera Centre looking to confine the memory of Sun Life’s 1996 victory to the history books once and for all.

On paper they are pre contest favourites to do just that, especially after their win at the Butlins Mineworkers contest in Skegness.

Paul Holland has a highly competitive band under his command that can mix it in top quality company, so what is there not to stop you from putting an extra few bob on the nose at the bookies?

Perhaps because that win was followed by a disappointing 4th place at Yeovil.

Consistency is the key to opening the door to a third successive London appearance, but also for a return to the British Open – although their record over the past few years suggests that even if they don’t retain their title, they are still the band to beat.

If they can rid themselves of the Sun Life curse, then you suspect they may go on and claim a Symphony Hall place too.

Their main rivals have brought in the big artillery to help fire them to Kensington, with the likes of Dr Nicholas Childs, Garry Cutt, Gareth Pritchard and Andy Duncan making long trips down the M5 to lead their bands in battle.

Woodfalls will not be short of confidence – although it must be tempered by the fact that despite doing well at Butlins and winning Yeovil for the first time in 25 years, both successes came in the X Factor format of entertainment contesting.

Even with the Black Dyke MD at the helm here in the last four years, they have yet to add to their 2002 Area title.

Their form though is good – winners of the Senior Cup, Wessex Open, top six places at the Scottish Open and Butlins.

A return to Kensington for the first time since 2008 beckons – perhaps as champions?

Camborne meanwhile will want to quickly forget about their early season appearance at Yeovil where they failed to impress anyone in coming 7th.

Garry Cutt returns to try and go one better than Ian Porthouse managed twelve months ago and lead Camborne to their second title in three years.

He will be smarting a tad after missing out with Kirkintilloch at Perth, so a third successive qualification place or better may be on the books.

Mount Charles meanwhile has been quietly but effectively going about its rebuilding process – picking up success on its travels (winning the Grenland Festival in 2010) and showing a real return to form in claiming a podium finish at Yeovil a few weeks ago.

Andy Duncan returns to lead a confident band as they seek to add to their last success in 2008.

The two Saint bands come to the contest boosted by recent good form, with St Dennis in particular looking to build on the excellent podium finish achieved at Pontins.

They have a proud history at this contest and have made startling progress since playing in the Fourth Section in 2002.

11th at Yeovil wasn’t a great early season boost, so they know they will have their work cut out if they are to better last year’s 5th place finish.

St Austell last qualified for the Albert Hall in 2005, and although having a bit of an up and down time of it of late, has started to show decent form once more under the baton of Gareth Pritchard.

10th place at Yeovil wasn’t their best, but a 4th place at the SWBBA contest last November hinted at their promise.

Lydbrook will surely fancy their chances of posting another solid performance despite finding life tough on their contesting travels at the Senior Trophy (16th) and the recent Welsh Open (9th).

They seem to find better form closer to home, winning the Gloucester Contest late last year and with the experienced Ian Holmes at the helm they should be confident of claiming their fourth consecutive top six finish.

The 2008 First Section winners Helston Town has found its feet at this level in the past two season and with a podium finish at the SWBBA Torquay contest to build on, John Hitchins band could be a bit of a dark horse this time around.

Meanwhile, 2009 First Section winners Poole Borough found life a bit tougher last year in ending 9th, and disappointed in coming a lowly 8th at the SWBBA contest, but Phil Randell is an experienced hand at the helm and they will be looking to take a few scalps at least.

So too Sherborne, who just a few years ago was competing in the Third Section.

Since then they have flourished under the baton of Paul Cosh, winning the SWBBA Contest last year and delivering a solid performance in coming 9th at Yeovil

Finally, the newly promoted First Section champion, Portishead Town, who under the direction of Ian Dickinson (who was in the 1996 Sun Life Band that last retained the title here) came a creditable 8th at Harrogate.

Amazingly, they were playing in the Fourth Section at the turn of the Millennium.

It’s about time that Sun Life curse was ended once and for all, and if Flowers really hit their bootstraps they could well be the band to do it this year.

That said, Woodfalls come to the contest full to the brim with confidence, Camborne and Mount Chalres are two bands more than capable of winning and winning well and even the outside bets such as St Dennis, Lydbrook and St Austell could spring a surprise or two.

No. Flowers for us, followed by Woodfalls, Camborne, Mount Charles, St Dennis and Lydrook.

Our dark horse is St Austell.

How West of England bands did in London: