A strong line up of contenders are set to face an even stronger test of musical character — thanks to Hector Berlioz and Frank Wright.. 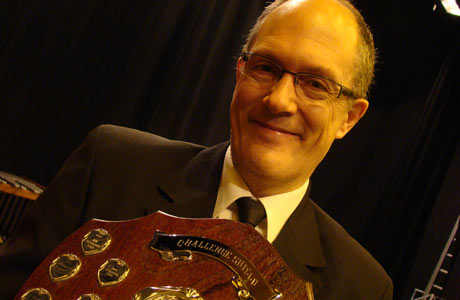 The West of England has not have produced a First Section National Champion yet, but you can’t fault the efforts they have put in trying to break their duck since 1992.

Last year’s qualifiers came 6th & 8th – not on the face of it the greatest of returns, but it is now six years in a row that at least one band has come back with a top six finish.

They are getting closer, with 11 of the last 12 bands to travel north (its always north for most qualifiers here) claiming a top 10 result – even if only two have managed a podium spot since the Millennium.

Highish hopes then for the two who will make the considerably shorter trip north to Cheltenham in September – with a few contenders considering that venue to be almost on home turf.

What the 15 competitors will make of a very stern test in ‘Le Carnival Romain’ we will have to wait and see.

So far it has claimed more victims than can be found in the battle scenes of a Berlioz opera, but most have put up a brave fight before succumbing to its treacherous fast paced technicalities and challenging emotion fuelled lyricism.

Plenty to ponder then for Ian Brownbill and Kevin Wadsworth (right) in the box – two men cut from a heroic adjudicating jib old Hector would admire from afar.

They will take some impressing.

It looks a well matched field on paper, with the one relegated and two promoted bands locking horns with the returnees from 2010.

Aldbourne who last won here in 2005 posted a highly encouraging 7th place at the Senior Trophy last May, and heads the list of runners and riders.

If they have built on that, another top six finish or better may beckon.

Bournemouth Concert Brass meanwhile will come to the contest brimming with confidence after building on their top ten result at the Senior Trophy and podium spot at Harrogate to post a top six finish at the recent Welsh Open against stern opposition.

They famously won here in 2004, and followed it up a year later by taking the top section title, so could history be about to start repeating itself?

Camborne B is on one heck of an upwardly mobile ascent – and now sits just one step away from a match up with their sister band in the top section if they can carry on the remarkable progress under Alan Pope.

The calendar omens may be in their favour after wins in the Fourth Section in 2007and the Third in 2009.

Chalford is likely to push any rival close if they repeat the form that saw them come 7th last year and 6th at the SWBBA contest at Torquay, whilst it would be foolish to underestimate Filton Concert Brass and their charismatic MD, Bryn James.

They were excellent value for their win in the Third Section last year and went on to come runner up at Harrogate.

They are a band very much on the up.

The 1999 and 2007 champion Hyde returns looking to recover some of the lost ground of the past two years, especially if they can build on the podium finish at the Gloucester contest late last year, whilst Lanner & District last qualified for the finals back in 2004, but has put in solid returns over the past few years as well as posting a podium finish at the SWBBA contest.

Lympstone South West Telecoms has fallen off the pace recently and will be looking to reverse the trend under Charlie Fleming’s direction as they seek their first qualification place since 2006, whilst the experienced (and very busy) Melvin White leads Michelmersh Silver once again as they seek to carry on the solid progress they have made since gaining promotion in 2008.

Ocean Brass has struggled to make a real impression at this contest in the past two years so will be determined not to be drawn into a possible relegation battle under Jonathan Camps direction, whilst Otterbourne Brass will one of the bands they may have to beat after the 2010 Wessex Open winners struggled last year in coming 12th.

Promoted Shrewton is certainly on the up, and despite not managing to make a real mark at Harrogate where they came 16th, Michael Dunford has done some brilliant work in developing his band in recent seasons.

STORM Brass returns for a second year – although they have been quiet of late on the contesting front and there is no news of who is taking them, whilst Verwood Concert Brass will be led by the experienced Phil Bailey as they seek to push on from last year’s fine 5th place finish.

Yeovil Town completes the line up as they look to start to return to the form that saw them enjoy over a decade in the top section before falling through the trap door last year.

A difficult one to call but the likes of Bournemouth Concert, Camborne B and Aldbourne have been impressive of late and should be battling it out for those qualification places.

Behind them we opt for a group of strong contenders in Verwood Concert, Filton and Chalford with Yeovil as our dark horse.