A little taste of Wales awaits the bands on Saturday — but they appreciate all things Celtic and ice cream down these parts. 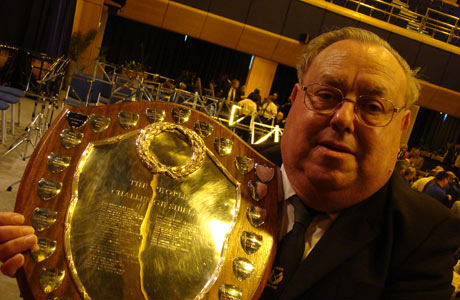 There is real strength in depth at this level in the West of England – as can be seen by the results qualifying bands have gained at the National Finals since the turn of the Millennium.

Although there is only one band that has come away with the National title itself in 2009 (Brunel Brass), the region has produced 3 consecutive podium finishers, and no less than 11 top six bands since 2000.

Plenty to look forward to then with this year’s well matched field of 12 contenders, although it is a pity to report that one of the non starters is St Breward, who won the Fourth Section National title in such wonderful fashion in 2009.

It’s hoped that both they and South Molton return for 2012.

Philip Wilby’s ‘A Little Light Music’ has a bit of a deceiving title – it’s certainly light and cultured, but by heck it’s proving to be as hard as the crust on a Cornish tin miner’s pasty.

What these bands will make of the little taste of Wales we will have to wait and see, but they do have an appreciation of all things Celtic down these parts (and they enjoy their ice cream too) so we could be in for some terrific playing.

Ian Brownbill and Kevin Wadsworth (right) are in the box – and two men who know what they like when they hear it.

They are not easily impressed by bluff and flather.

The field is made of 9 returnees, with two promoted bands from the Fourth Section and one relegated from the Third.

Bream Silver heads the alphabetical entry list under the direction of the talented Huw Cole.

They were runner up last year and were unfortunate only to come 14th at Harrogate after delivering a very purposeful account of themselves that perhaps deserved a top six finish.

They are an improving band and should fancy their chances of a return to the finals once more.

Corsham meanwhile is also a band on the up – improving six places in the results table last year and picking up a podium finish at the Wessex contest.

Denmead Brass under Estelle Flood is also a solid ensemble and although coming 9th last year, has posted three top six finishes in the past four years.

Downton will be looking to take another step up the sectional ladder after gaining promotion last year and delivering a fine account of themselves at Harrogate in the Fourth Section finals, where they came 5th.

Gillingham Imperial Silver won the Wessex Second Section contest and last qualified in 2006, so they should come with confidence despite their relegation from the Second Section, whilst Pillowell Silver last made it to the finals in 2004, but made a huge leap up the results table last year when they came 4th.

They could be a band to watch out for.

Last year’s champion Sidmouth were excellent value for their victory under Adrian Harvey’s direction and went on to produce a top class performance at Harrogate where they came 3rd.

More of that and they could well be celebrating again.

St Stythians fell away last year to come 13th, but will surely be boosted by the form they showed in coming runner up at the SWBBA contest, whilst there is sure to be great support for the youngsters of Test Valley Brass.

They took the Fourth Section title last year in thrilling fashion and went on to produce a solid showing at the finals in Harrogate.

A year on they are looking to return once more – and they could be something of a dark horse.

Nigel Morgan is one of life’s great musical optimists, and his excellent work at Tewkesbury is paying dividends slowly but surely. 8th place at Butlins was a fine effort and should give them a boost of confidence as they look to claim a possible top six finish.

Weston Brass has now claimed two top six finishes in the past two years and will look to make it three in row, whilst Weymouth Concert Brass came 14th on debut last year, but has shown good form of late in claiming a podium finish at the Wessex contest and coming 4th at the SWBBA event.

There are a batch of quality bands here that could win and win well, and the MDs don’t try to do anything silly with a piece that is hard enough as it is.

That’s why we have opted for Sidmouth to be followed to Cheltenham by Bream once more. They are two good bands with two talented young conductors.

Right on their tail though should be the likes of Gillingham Imperial, Corsham, Weston Brass and Tewkesbury, whilst our dark horses are Test Valley Brass.