Can Foden's retain their title and create even more history of their own at the Winter Gardens? 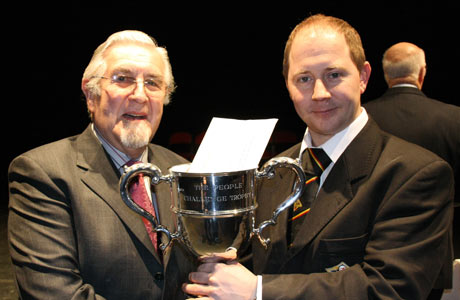 Can the Foden’s North West Area hegemony be ended in 2011?

A tasty line up of 11 bands takes to the stage at the revamped Opera House (no Wire Brass following their non competitive decision) to see who can master the trials and tribulations of Philip Wilby’s ‘Paganini Variations’ and book a place at the Royal Albert Hall in October.

Foden’s though will be just sweating a little more than usual, as despite being unbeaten here since 2005, they failed to claim one of the automatic qualification places at Kensington, which was taken by a revitalised Fairey (Geneva).

There are two qualification places up for grabs then (it was nearly three thanks to Leyland putting in their best performance for while), and with some decent form being shown from other contenders, there is a whiff of a possible upset or two in the air.

There will be more than a few hard glances being cast in the direction of John Berryman (right) this year as the Virtuosi GUS MD has the unenviable task of being the sole arbiter of the contesting fates.

The reigning champion has left nothing to chance, and after a rather uneven 2010 season have made a clear statement of intent with the decision to bring in Allan Withington to lead them.

Their former principal cornet player is one of the very best around and may relish the chance to claim his first North West Area title.

Fairey (Geneva) has endured a long decade waiting to try and claim a 14th Area title – their last win coming back in 2001 under the baton of Howard Snell.

They have come close since – but this will undoubtedly be their best opportunity to close the gap on 17 wins of Foden’s, having beaten their rivals on their last three battles at the British Open, London and Brass in Concert.

Leyland meanwhile will be hoping to claim their first title since 2005, and after a low key start to their partnership have found their stride under the baton of Philip Harper.

A fine showing at London was followed by a high class effort at Brass in Concert, and with the band now on a solid organisational footing things could about to take off on the contest stage too.

Most neutral punters would put their money on one of these three bands walking down the new atrium at the Winter Gardens with the People’s Challenge Trophy tucked under their arm, but a surprise victory is long overdue.

Wingates was the last band to break up the heavyweight domination back in 1995, when they won under the direction of John Hudson, and there is now a real air of confidence about the Westhoughton outfit.

Alan Morrison once again takes the helm at a band on the up and there is a feeling that although a seventh Area title may just beyond their reach, a return to London for the first time since 2004 certainly isn’t.

Another band looking for an Albert Hall return is Pemberton Old Wigan DW under Mark Bentham, who despite a poor return at Pontins late last season, rallied impressively with a fine podium finish at the Scottish Open and a solid victory at the recent Brass at the Guild Hall contest.

They are sure to be well prepared as they seek a second qualification spot in three years.

The battle for a top six place is likely to be equally hard fought, and it could well be led by Blackburn & Darwen, who despite an uneven Butlins performance earlier this year did show good form at Pontins.

Co-operative Milnrow meanwhile has been a consistent contender over the past few years and should be confident of a third top six finish in four years, whilst the dark horse on this occasion may well be Ashton under Lyne, who came 5th last year and put in a solid showing at Pontins too.

Co-operative Crewe under Jef Sparkes will be looking to reverse a trend that has seen them just drop off the pace in the last couple of years, whilst VBS Poynton will be looking to make a mark on their return to the top level for the first time since 2007 under the talented Kevin Gibbs.

Silk Brass Macclesfield meanwhile will be looking to do the same on their debut. It’s a wonderful achievement, as just two years ago the band was playing in the Second Section.

They should be well prepared for the job in hand under the baton of the experienced Paul Andrews.

Fairey (Geneva)’s time may have arrived, and with an inspired Russell Gray at the helm the title could well be heading back to Stockport for the first time since 2001.

However, Foden’s were equally inspired at the RNCM a few weeks back too, so we think they may just repel their old rivals once again.

Leyland should be snatching at their coat tails under Philip Harper, whilst Wingates and Pemberton won’t be too far behind either. Co-operative Milnrow should claim the final top six place, with our dark horse of Ashton perhaps waiting to produce a bit of a shock themselves.

How North West bands did in London: