A great line up of bands to tackle John Golland's set work, but which one will be making a song and dance in celebration? 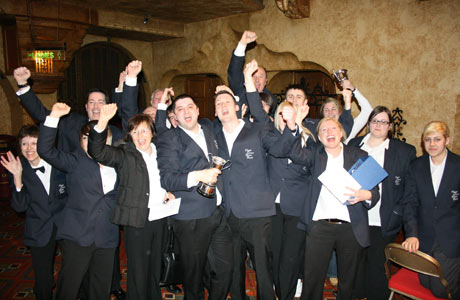 Paul Norley has drawn the short straw in Blackpool – but he won’t mind we don’t think.

23 performances of John Golland’s ‘Prelude, Song & Dance’ may test the patience of even the most committed brass band lover, but when the standard is as good as this, time may fly by.

And the standard at this level in Blackpool is very good indeed – if last year’s trio of qualifiers was anything to go by.

Hazel Grove, Besses Boys and Farnworth & Walkden produced three excellent performances to claim their places at Harrogate, and then went on to fill the podium places there as well – with an unprecedented 1/2/3.

It was no fluke either, as the North West has now produced four National Champions in the last six years, and no less than 11 top six finishers since 2005.

In total, since the turn of the Millennium, the region has claimed five victories and a total 16 top six finishes.

No wonder the thought of a marathon contest here is something to enjoy not fear – and there is whole gamut of bands all more than capable of emulating their illustrious predecessors given half the chance.

There is also added good news this year, that despite losing Brindle and Friezeland from the list of competing bands, Mereside Brass, Port Sunlight Lyceum Brass, Rode Hall and newest of all debutants, Wirral Brass, have replaced them.

Besses Boys remain this year despite coming runner up both here and at Harrogate. James Holt has a fine band under his command and with a second place at Pontins and a win at the recent Brass at the Guild Hall contest in the Third Section they should be the bookies favourites.

Blackley will be encouraged by their performances at Pontins where they came 10th and their podium finish at the Northern Open as they look to bounce up the results table from last year’s 20th place, whilst Boarshurst under the direction of Dave Ashworth will surely be contender to watch out for after coming 5th last year and winning at the Guild Hall in the Fourth Section.

Peter Motterrhead brings City of Chester hoping to improve on last year’s 15th place, whilst Coppull & Standish will have taken a great deal of encouragement from their podium finish at Preston in the Third Section.

Darwen Brass has been gaining the plaudits under the guidance of Steve Hartley – posting top 10 finishes at Pontins and Preston, whilst Denton Brass will be looking to build on a solid showing at Prestatyn as they aim to push up the results table from last year’s 22nd finish.

Trombone star James Garlick continues to do great work with Dobcross Youth, whilst Ellenbrook & Boothtown produced a fine account of themselves last year on their first contest appearance since 1999.

Golborne will look to put behind them some fluctuating results here over the past few years as they build on a solid showing at Pontins, whilst Greenfield will look to turn around a disappointing return 12 months ago when they ended in 18th .

Littleborough claimed a top ten finish on their fist appearance back in three years last season and went on to post a solid 12th place finish at Pontins, whilst we believe Mereside Brass from Plumley near Northwich is making their first appearance back at the contest for some considerable time under the baton of Mike Phenton.

Nelson Brass has been making real progress at this contest in the last 3 years and under Steve Brodie they posted a fine 4th place finish 12 months ago – just missing out on a trip to Harrogate.

Since then they came 8th at Pontins, so should be confident of going one step further this time around.

Parr (Richardson Ltd) St Helens will be boosted by their recent podium finish at Brass at the Guild Hall, whilst Pilling will be looking to return to better contesting days after last year’s disappointing 14th place.

There is a welcome return for Port Sunlight Lyceum Brass under the direction of Cyril Dare as they make their first appearance here since 2005 – who Dare’s wins then?

Meanwhile, Ramsey Town will be looking to show their quality as they rather unluckily fell through the relegation trap door from the Third Section – despite coming a solid 12th last year.

Rode Hall is another returnee and will be looking to secure a solid performance, whilst Sale Brass will be boosted by their recent appearance at Brass at the Guild Hall where they came 4th.

That just leaves a final trio of Tarleton Brass looking to push for a top ten place and build on their recent Preston appearance, and Tottington Public who returned last year to put on a solid showing despite their result.

Finally, a welcome debut for Wirral Brass – formed in February 2010 and making their very first contest appearance on the weekend. We wish founders Peter Smith, Scott Lloyd and their band all the very best of luck.

Now you are asking! Necks on the line then and Besses Boys should be in with a very good shout If they play like they did last year.

Boarshurst are also in very good form under the wily Dave Ashworth, whilst Coppull & Standish and Darwen Brass have been attracting a few bob at the bookies.