An immensely difficult test awaits the nine bands on Sunday morning thanks to Hector Berlioz and Frank Wright. 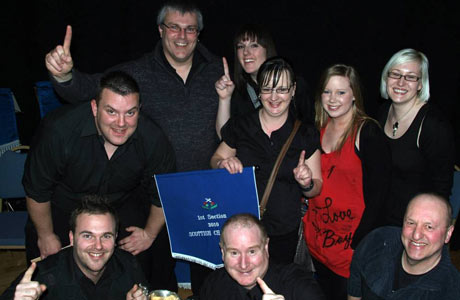 Scotland is still to produce a First Section National Champion, but they are getting closer, with Bo’ness producing a fine account of themselves at Harrogate to come 4th last year and Lochgelly ending in 10th – the best set of results of any Scottish bands at the Nationals.

With those bands promoted to the Championship Section there is a fluid feel to this contest with the field made up of two relegated outfits in Kirkintilloch Kelvin and Clackmannan and two promoted ones in Dalkeith & Monktonhall and Coalburn Silver who join five of last year’s contenders. All look solid outfits though.

The set work is sure to test the bands to the full with its fearsome challenges for euph, sop and flugel as well as its ensemble traps (top D’s for solo cornets from the word go), but a number of these contenders should approach the contest with confidence.

There should be plenty for Melvin White and Stan Lippeatt to enjoy in the box.

Johnstone Silver should be the bookies pre contest favourites after enjoying a fine 2010 that saw them claim many a notable scalp along the way – especially at the Land O’ Burns Contest and the Scottish Shield.

Ray Tennant has a very competitive outfit under his command as they seek to put behind them the disappointment of missing out last year.

The two relegated bands also have plenty of experience both in front and behind the stands with Clackmannan looking to make a sharp return to the Championship Section after showing they were not too far behind the pace in the past two years.

So too Kirkintilloch Kelvin, who won here in 2009, but endured a pretty tough time in with the elite bands twelve months ago.  Both are strong contenders at this level.

The two promoted bands will be keen to make an immediate impression, with Jim Chamberlain’s improving Dalkeith & Monktonhall looking to build on their good showing at the Scottish Shield, and Coalburn also looking to build on a solid finish there under the talented Gareth Bowman.

It is a step up in class though and both bands will want show they have improved on their midfield finishes at Harrogate.

Newmilns & Galston enjoyed a decent 2010 and will be keen to push on from last year’s fifth place, whilst the youthful Arbroath Instrumental could be a band to watch out under Michael Roberston’s intelligent direction.

The talented Eoin Tonner leads Bathgate once again as they look to push for a podium finish after last year’s sixth place, whilst another rising conducting star in Charlie Farren will be keen to turn around the fortunes of Broxburn & Livingstone after their seventh place last year.

If Johnstone produces the form that they showed on a host of occasions in 2010 then the title could be heading their way, although we think they will be pushed by both Kirkintilloch Kelvin and Clackmannan.

Arbroath Instrumental could force their way right into the mix, with Newmilns and Dalkeith not too far behind.  Broxburn is our dark horse.

Scottish Bands at the Finals: