Who shall rise again to make it to Cheltenham later this year? Eric Ball certainly hasn't made it an easy task. 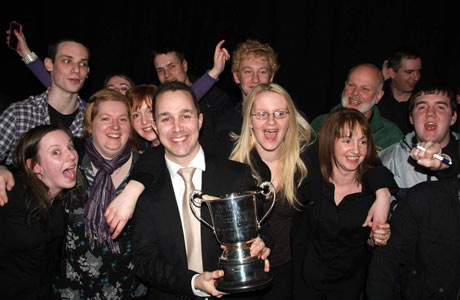 If you thought ‘Carnival Romain’ was a hard test for the bands, then think again – ‘Resurgam’, despite its outward appearance and age, is as severe a test of traditional brass band musicianship and technique as they come – right from the first note.

Peter Bassano and Graham Jones (both right) could find themselves with a difficult task of separating out the 12 bands on a piece that still takes some playing by a good quality Championship Section outfit.

Religious considerations aside – a few prayers may be made at some stage during performances.

Second Section banding hasn’t been too great here in recent years – the two qualifiers coming 12th & 13th at Harrogate – the fourth year in a row that they have sent representatives unable to claim a single digit finish.

Hope springs eternal however and there are signs that this competitive dozen could provide two strong contenders for Cheltenham, especially as six of them put up pretty good performances at the Scottish Borders contest late last year and three more than held their own at the Scottish Challenge Shield in Perth.

Two bands come down from the First Section and two are promoted from the Third in what looks like a well matched field.

The bookies favourites may well be Tullis Russell Mills, who missed out last year in coming 5th, but won the Borders Contest under the exciting direction of Martyn Ramsay, whilst City of Discovery under Bruce Wallace were unlucky not to get the qualification nod last year and have since improved further with a solid show at the Scottish Shield.

Kilmarnock Concert returned to the contest last year and won the Third Section title in some style under the direction of Craig Anderson, and after a competitive showing at the Scottish Shield, they too should be confident of pushing for a top six place.

The experienced Mike Marzella will lead Shotts St Patrick’s as they look to claim a podium spot following last year’s 4th place and 7th at the Scottish Borders, whilst Croy will look to claim their first podium spot since 2008 on the back of a fine runner up place at the same contest.

Annan and Dunaskin Doon will be looking to a return to better form following their relegation from the First Section, with Annan looking to build on their 4th place finish at the Borders Contest and Dunaskin Doon seeking to reverse a drop in form that has seen them fall from the top section to here in three short years.

Granite City Brass will be keen to improve on last year’s 7th place finish, whilst Selkirk will be looking to push forward on the back of a solid showing at the Borders Contest.

Barrhead held their own last year and will look to build on that under the experienced Brian Keachie, whilst promoted Irvine & Dreghorn continue their upwardly mobile march under the equally experienced John Boax.

Meanwhile, St Ronan’s Silver will be seeking to build on a solid performance at the Borders Contest under David McLeod.

A difficult one to predict, but Tullis Russell Mills seem to have form and could well head back to the finals for the first time since 2006, joined by City of Discovery.

Shotts St Patrick’s and Kilmarnock Concert could well be in the hunt if the top two don’t do the contesting business, whilst Granite City and Dunaskin Doon should claim the final top six spots. Our dark horse is Croy Silver.